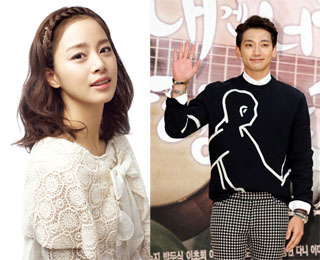 Singer-actor Rain and his actress girlfriend Kim Tae-hee are still together.

According to multiple industry insiders on Monday, the two recently reunited in Shanghai, China.

Kim flew to the city to meet Rain, who is currently shooting the film “Diamond Lover” there.

The A-list couple began dating in late 2012 and have been enjoying time together outside of Korea to avoid public attention.

In late 2013, Kim also flew to Los Angeles to meet Rain who was staying there for his film “The Prince,” and the two visited a theme park together.

Rain and Kim were involved in a rumor last year that presumed they would tie the knot after it turned out that Rain, a Buddhist, had been baptized at a Catholic church because Kim is a devoted follower of Catholicism.

But the two denied the rumor.

Kim is having some downtime after her previous drama series “Jang Ok-jung, Living by Love” (2013) ended, and Rain has been working on his career in China in recent months.