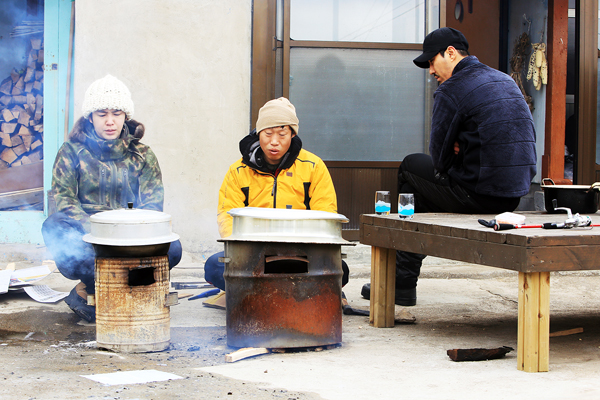 From left: Jang Geun-seok, Yoo Hae-jin and Cha Seung-won appear in the spinoff version of “Three Meals a Day - Fishing Village,” which takes place on the distant island of Manjae. Provided by CJ Entertainment

Capitalizing on the popularity that celebrity reality TV show “Three Meals a Day” enjoyed last year, the producers of the show are aiming high for its spinoff “Fishing Village” to reach success.

Fueled by a brand-new cast, location and more intensive physical labor, the show will feature actors Cha Seung-won and Yoo Hae-jin. Yoo will replace Lee Seo-jin, who was at the helm of the show, while Hallyu star Jang Geun-seok will replace Ok Taec-yeon as the young blood in the cast who has to take care of trivial errands.

“Three Meals a Day” is a variety show launched last year in which the main cast has to fix up three meals per day with the ingredient they harvest from the fields or the animals they tend to.

It originally took place in a mountainous village in Jeongseon, Gangwon, but has moved to the seaside, deep inside an island called Manjae, which takes six hours to reach by ship. 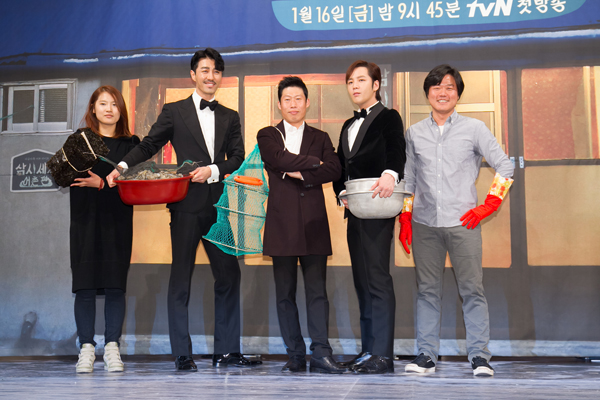 “Every day it was never-ending labor,” said Cha, 44, at a press conference held Friday in southern Seoul. “We woke up at 5:30 a.m. to dig up mussels with the villagers. That was the most memorable moment.”

The producer and other cast members agreed that the environment was harsher compared to the Jeongseon series.

“At least in Jeongseon we could go to a nearby town if we really needed to rest and were frequently visited by guests from Seoul,” said co-producer Na Yeong-seok. “But the island was completely isolated. The only entertainment was going to a market called Manjae, but most of the time it was closed.”

Jang, who hasn’t participated in a variety show until “Fishing Village,” revealed that having his name called constantly was the “scariest” part.

“I never realized that being called on by my name was such a scary thing,” said Jang, explaining that Cha and Yoo persistently yelled for Jang whenever they needed help cooking or making fire.

“Also, we become so ugly in the show that I want to tell my fans to avoid watching it,” laughed Jang, who was welcomed by dozens of domestic and international admirers at the press event.

“Fishing Village” will deliver better-looking cuisine, according to Na.

“In the spinoff, I wanted to present cooked food in a nicer way compared to the original version,” he explained.

This is one of the reasons he cast Cha, Na said, who he knew has profound knowledge of food.

“Viewers will be very surprised if they see the show,” Yoo said.

“Geun-seok cooks well, too, but Seung-won’s cooking is up to the point where it is amazing.”

Jang, whose father and grandfather run their own fish farms, came in handy gutting fish.

“I am more of an expert at freshwater fish, but fish from the sea are more difficult,” said Jang, who is often dubbed the “prince of Asia. “However, we ate some dishes like sashimi and maeuntang [fish stew], too.”