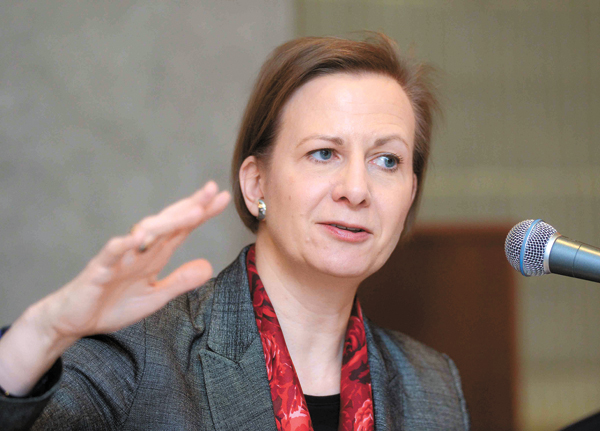 Will the U.S. Federal Reserve’s rate hike be bad news for the global economy and emerging markets including Korea?
“One of the questions that keeps coming up [during my trip to Singapore, Hong Kong and Taipei] has been ‘Is it bad news when the Fed hikes rates?’” said Michala Marcussen, head economist at Societe Generale, during her visit to Seoul on Monday. “My answer is, it is bad news if they don’t. Because what does it mean if the Fed doesn’t tighten [its monetary policy] in 2015? It essentially means that the underlying U.S. economy is not yet strong enough for the Fed to tighten.”
She said that in making its decision, the U.S. central bank will also have to weigh in on the global economy, including the credit cycle and the potential buildup of asset price bubbles, which the institution ignored when it was headed by Alan Greenspan, contributing to the global economic crisis of 2008.
“Keep in mind it’s not just a question of headline inflation. Indeed, this was a mistake by Greenspan’s Fed, which was to ignore other factors in the economy,” she added. “It’s about slack. It’s about the international downside risk. The Federal Reserve, of course, does not set the course for the world. But to the extent that concerns elsewhere weigh in on the Fed and weigh in on the U.S. economy, they will take it into account.”
Adding that she expects and hopes that the Fed will have the confidence to tighten its policies, the Societe Generale head economist projected the institution will raise the interest rate three times this year.
A Korean economist at the European financial company, Oh Suk-tae, said he supported the rate hike, adding that unlike the concerns swirling in the market that the Fed’s interest hike would have a negative impact on emerging markets, including the Korean market, he believes it will bring positive results.
There have been growing fears that once the U.S. Fed raises the interest rate, which many expect will happen either in the second or third quarter, it will trigger a massive exodus of foreign investors from emerging markets, disrupting financial markets in Asia.
Oh said he thinks it would have the reverse effect even if the central bank lowers the key interest rate to a new low of 1.75 percent, which is likely to come in the second quarter.
“Once the Fed raises the interest rate, it will clear any uncertainty in the market and attract foreign investors to emerging markets, particularly Korea,” Oh said. “As you would remember, early last year there were fears about the Fed ending quantitative easing, but when it actually happened [in October], the market stabilized more than before.”
Oh said the Korean central bank will likely shave another 0.25 percentage point off the current record-low 2 percent key rate because there is little pressure of deflation or downward risks that might encourage the Bank of Korea to maintain the current rate.
The comment by the Korean analyst came early Monday morning before President Park Geun-hye’s New Year’s press conference, in which she hinted at a rate cut.
On this year’s global economic growth, Marcussen wasn’t too optimistic. Comparing it to London’s damp weather, she said this year would be a major challenge for the global economy including Korea. But even in a bad scenario it wouldn’t lead to the global crisis that happened in 2008-09.
“All the excessive liquidity globally from Japan and Europe combined with the U.S. [quantitative easing] has probably driven toward an asset price bubble,” Marcussen said.
“The story can end in two ways. There is a nice ending and there’s a bad ending. In the nice ending, the fundamentals catch up, the economy starts to grow, we get structural reform accelerating in Japan and the euro area and the fundamentals finally catch up to the market and underpin corporate profits. The bad ending is that Abenomics fails to deliver the necessary reform, the euro area reform continues to be slow — we may even see a new tension over risk sharing in Europe — and we end up with quite difficult markets, and I think at the beginning of this year it looks more like the second idea,” she added.
“So I think 2015, in terms of markets, it will be a key year in testing some of these mechanics and testing the willingness of reform. And at the end of the day, the willingness of reform will be a very deciding factor.”
On the slowing Chinese economy, the economist said it is something that many are concerned over but that she would not put too much emphasis on it since it is an indicator that the Chinese economy is heading toward more balanced and sustainable growth. 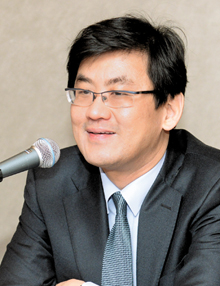