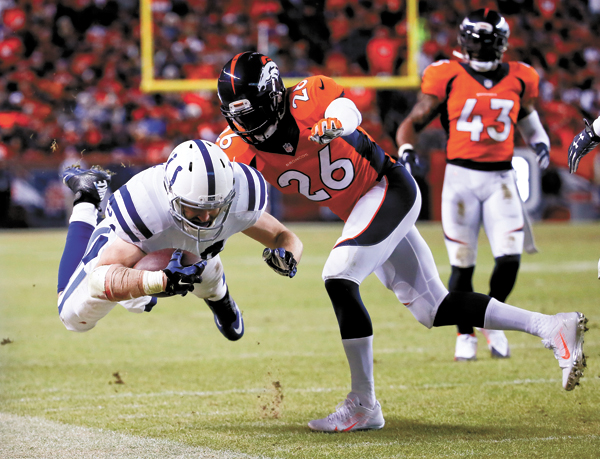 Indianapolis Colts running back Ahmad Bradshaw is knocked out of bounds by Denver Broncos free safety Rahim Moore during the second half of an NFL divisional playoff football game on Sunday, local time, in Denver. [AP/NEWSIS]

Andrew Luck has his signature NFL win, and it came against his predecessor, at that.

“I think we’re playing good team ball,’’ Luck said. “We’re feeding off each other. Offensively, we’re making enough plays to put some points on the board. Great night. So proud to be a part of the Colts in this victory.’’

The Broncos (12-5) are left to deal with the hangover of yet another playoff debacle - and maybe questions about Manning’s future as well as that of Coach John Fox.

Manning, who joined the Broncos in 2012 after his release from Indy, has gone one-and-done in the playoffs a record nine times in his otherwise stellar career, including twice in Denver, where he’s 38-10 in the regular season, but just 2-3 in the playoffs.

Overall, he’s 11-13 in the postseason and this was one of his worst playoff performances ever. He never found a rhythm, constantly overthrew his receivers and finished 26 of 46 for 111 yards, one TD and no interceptions.

It wasn’t the kind of bounce-back the Broncos expected after watching Manning throw just three TD passes with six interceptions in December after Denver downshifted its high-octane offense.

Each of his three seasons in Denver has ended in humbling losses, to the Ravens and Colts at home after first-round byes and to Seattle in last year’s Super Bowl.

These Broncos were better balanced with a grinding ground game and star-studded defense bolstered by John Elway’s free-agent signings of Aqib Talib, DeMarcus Ware and T.J. Ward to a guaranteed $60 million.

Luck completed 27 of 43 passes for 265 yards with two TDs and two interceptions that were the equivalent of punts and no sacks.

The Colts stretched a four-point halftime lead to 21-10 when Luck drove the team 72 yards in 11 plays, hitting Hakeem Nicks from 15 yards midway through the third quarter.

The Broncos finally got something going after their second interception of Luck, this one by Rahim Moore at the Denver 24.

On fourth-and-1 from the Colts 36, C.J. Anderson eluded three tacklers in the backfield as he spun and slashed his way for 7 yards. But once again, the Broncos stalled and had to settle for Connor Barth’s 41-yard field goal that made it 21-13 with 13:50 remaining.

The Broncos’ pass rush couldn’t get to Luck, who drove the Colts 54 yards in 13 plays, chewing up more than eight minutes before Adam Vinatieri’s 30-yard field goal made it 24-13 with four minutes remaining in half-empty Sports Authority Field.

Manning was just 7 for 18 for 71 yards in the first half. After completing all three of his passes on Denver’s first drive, including a 32-yarder to Julius Thomas and a 1-yard TD toss to Demaryius Thomas, Manning was just 4 for 15. AP