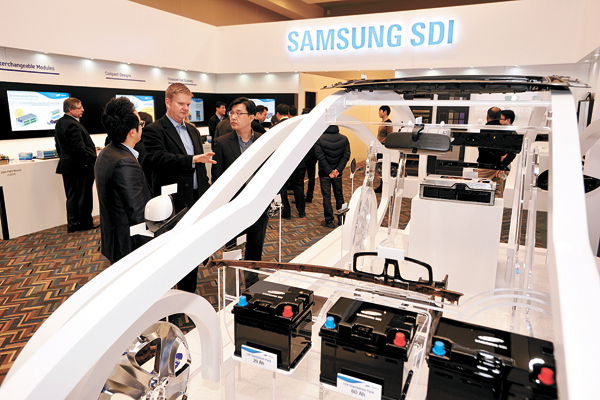 Employees of Samsung SDI explain electric vehicle batteries at the company’s booth at the 2015 North American International Auto Show in Detroit. Provided by the company

Samsung SDI, the world’s largest maker of smartphone batteries, on Monday showed its new batteries and materials for cars at the 2015 North American International Auto Show in Detroit.

The company said at the start of the show that it was exhibiting batteries for electric cars and interior and exterior materials for regular vehicles.

The show at Cobo Center is the first time Samsung SDI has shown new batteries along with materials for cars since it merged with Cheil Industries’ materials division in July.

Samsung SDI plans to expand its competitiveness in electric car batteries and interior and exterior materials for cars to satisfy both manufacturers and customers.

The company is showing four types of electric car batteries at the Detroit exhibit.

The first is the large-capacity 120Ah cell for long-distance electric cars, which allows a vehicle to travel more than 300 kilometers (186 miles) on a full charge.

The company also introduced a battery that could fit a plug-in hybrid electric vehicle and an electric vehicle. Making the cells the same size will allow automakers to standardize the space allocated for the battery in vehicles.

The company also displayed a compact battery that is 20 millimeters (0.8 inch) smaller than a regular battery, but has the same capacity.

The last new battery being shown at the auto show uses a low voltage system, which can improve fuel efficiency and reduce carbon dioxide emissions.

“Through this exhibition, we wanted to show different products that the customers and market want,” said Jung Se-woong, head of the midsize to large battery division at Samsung SDI. “We will continue to cooperate with global automakers in the U.S. market.”

The company also showed its high-quality and eco-friendly materials for the interior and exterior of vehicles using its technology in plastic materials for electronics.

The company put a special focus on metallic materials that are colored during production rather than painted afterward, so they less likely to peel or fade.

The product was used in Ford’s 2015 Mondeo and won a Gold Award at the SPE Automotive Innovation Awards.