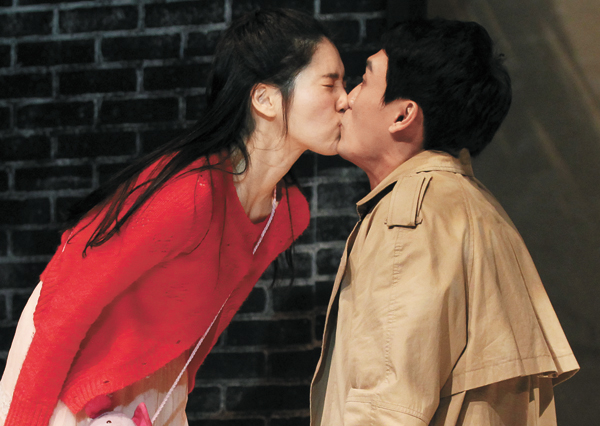 Mi-hyun, played by actress Jeon Kyung-soo, kisses Chan-il, played by actor Choi Dae-hoon, when Chan-il says he is confused about whether he likes Mi-hyun as a friend or really loves her. [JoongAng Ilbo]

A marriage of 10 years is on the brink of collapse when the husband cheats, even though the couple seems perfect on the outside.

The shocked wife runs to her secret love, whose fiancee finds out but just wants him to come back.

This type of tangled plot is frequently seen in TV dramas. But popular playwright Jang Yoo-jeong decided to use it in “Melodrama,” her first play as a director six years ago.

And now Jang has brought the story back to the stage. 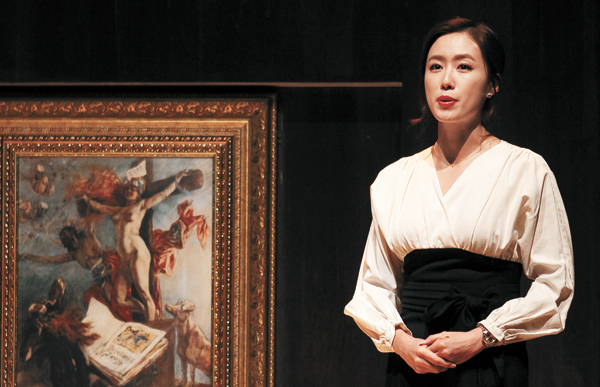 Actress Hong Eun-hee returns to the stage for the first time in six years to take up a role as Seo-kyeong, a curator who is married to Chan-il. [JoongAng Ilbo]

“I did not make that many changes,” said Jang. “Of course I wanted to revise many things as I wasn’t married when I wrote the screenplay, but I decided to just leave it as it is because I wanted the audience to see the story as it is, because that’s how I felt about marriage back then.”

The only tweaks Jang made was the addition of two scenes. One is a flashback where So-yi, the fiancee, looks back to when she was happily dating her boyfriend, Jae-hyun. Another is when Jae-hyun reads a letter to Seo-kyeong, the married woman he falls deeply in love with.

Jae-hyun and So-yi got engaged at a young age after both their families died in a car crash - apart from Jae-hyun’s older sister Mi-hyun.

Jae-hyun is given a heart transplant after the accident, which was made possible when it transpires that So-yi’s brother, who died in the fatal crash, is a match.

As a result, Jae-hyun feels obliged to marry So-yi. But he also realizes that life is short and has the urge to chase after real love.

Meanwhile, Mi-hyun, who constantly searches for the love of her life, meets Seo-kyeong’s husband Chan-il. He takes good care of her, unlike other men who just want to sleep with her.

“I know the audience will probably be more familiar with seeing such a knotty love story in television dramas,” Jang admitted. “However, I wanted to show various emotions about love and what people go through while also throwing up questions I had back when I wrote this screenplay like ‘Why do people get married?’ and ‘Does love require obligations?’?”

Jang, who has created hit plays such as “Finding Mr. Destiny” and “The Days,” uses various aesthetic devices in the play.

“Melodrama” starts off with Seo-kyeong, who is portrayed as a successful and professional curator, explaining a piece of art at a gallery. Jae-hyun has French painter Henri de Toulouse-Lautrec’s painting “The Kiss” on his wall and the relationship between him and Seo-kyeong goes deeper as the two talks about the work.

“I was interested in Lautrec because, first of all, he suffered from health problems. He also lived until the age of 30, just like Jae-hyun in the play. There is something about his paintings that expresses the bursting of emotions,” Jang said.

The director also uses folk music from Romania and Slovakia within the play that she personally collected during her trip.

“As for the music, I wanted to use something very unfamiliar to Koreans’ ears. Music that’s very exotic but very warm and congenial,” she said.

Actress Hong Eun-hee also made her first theatrical comeback in six years for “Melodrama.” She is double-cast in the role of Seo-kyeong with actress Bae Hye-seon. Jae-hyun is double-cast by actors Jo Gang-hyun and Park Seong-hoon while Chan-il is shared by actors Park Won-sang and Choi Dae-hoon. Actress Kim Na-mi and Park Min-jeong will alternate the role of So-yi while Mi-hyun is played by Jeon Kyung-soo.

“Melodrama” will run through Feb. 15 at the Jayu Theater in the Seoul Arts Center, southern Seoul.