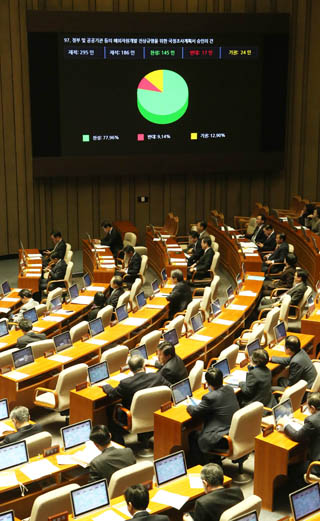 The National Assembly passes a special probe into resource investments by previous governments at a plenary session Monday.

The ruling and opposition parties agreed Monday to delay the passage of an antigraft bill known as the “Kim Young-ran bill” until the parliamentary session next month amid growing concerns over who will come under the law’s provisions.

While the Saenuri and the New Politics Alliance for Democracy promised to send the long-awaited bill to a vote next month, which is expected to be passed without much of a challenge, it is still possible there could be some adjustments in the specifics of the bill - or an open demand from lawmakers that the bill needs an overhaul.

The antigraft bill was supposed to be voted on Monday, but over the weekend lawmakers on both sides of the aisle said its application would be too broad and nearly 20 million people would be affected.

Under the bill - whose official name can be roughly translated to as an “act on preventing the taking and giving of bribes for influence-peddling” - public officials will be criminally charged and could face up to three years in prison if they are found to have received money or items worth 1 million won ($900) or more on one occasion, regardless whether the payment was intended for a particular favor.

If a public official receives money or goods worth less than 1 million won in connection with influence-peddling, he or she will be liable to a fine of up to five times the value of the money or gifts received.

Its definition of who is a public official includes staff members of private high schools and universities, kindergarten teachers, medical staff at major hospitals and journalists because it considers the nature of their work “public.”

Another controversial facet of the bill is that it also includes relatives of public officials.

If a relative of a public official receives money or gifts worth 1 million won for influence-peddling, the official - but not the relative - will be criminally charged.

The bill, which is named after the former head of an anticorruption commission who proposed the legislation in 2011, is supported by a public calling for tougher punishments for dirty public officials, especially following the sinking of the Sewol in April last year that left more than 300 dead. That tragedy laid bare the rampant corruption between the public and private sector.

While the two parties postponed the passage of the bill Monday, the National Assembly passed dozens of bills designed to boost the economy as well as a special compensation bill for the families and victims of the Sewol sinking during this year’s first plenary session Monday.

The Assembly also adopted a plan for a special parliamentary probe into the “resource diplomacy” pushed by the former Lee Myung-bak government. Under the bipartisan deal, the special probe will look into investments in natural resources like oil made by not only officials from the Lee administration, but also from the Kim Dae-jung and Roh Moo-hyun governments.