Park refuses to shuffle her staff

Park refuses to shuffle her staff 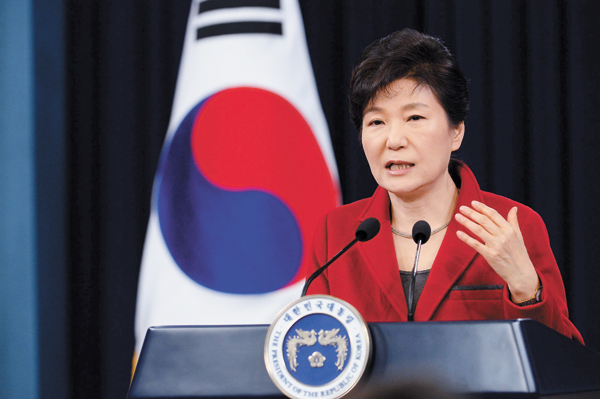 President Park Geun-hye insisted Monday she won’t replace her embattled Chief of Staff Kim Ki-choon and the three secretaries who have aided her ever since her days as a lawmaker.

The comment came after persistent suggestions from the main opposition party, the media and many ordinary Koreans that Park purge some close aides to take responsibility for the scandal over an alleged behind-the-scenes power struggle at the Blue House.

“There are many impending issues to be resolved at this moment and they should be tackled first,” she said in a New Year’s press conference at the Blue House when asked by a reporter how she intends to handle the controversy surrounding her 75-year-old chief of staff. “[Replacing Kim] is an issue to be decided after those issues are finished,” she added, leaving room for interpretation that she might let her top secretary go later.

She said there was no reason to replace the three presidential secretaries - Lee Jae-man, Jeong Ho-seong and Ahn Bong-geun. “Not only the prosecution but also the media and the main opposition party have been searching for any corrupt behavior, but none has been found,” she said.

President Park Geun-hye has a session with reporters after she gave her New Year’s address on Monday at the Blue House in Seoul. [Joint Press Corps]

In a leaked Blue House internal report that triggered the Park administration’s biggest political scandal in late November, the three secretaries are described as “doorknobs” for their power to control access to the president. The report alleged that Chung Yoon-hoi, the president’s former aide, meddled in state affairs while having regular meetings with the three secretaries and other staff members at the Blue House.

Even though the prosecution concluded earlier this month that the leaked report was based on “groundless rumors,” suspicions over a secret power struggle among Park’s aides and her younger brother have lingered. The media and main opposition party have urged Park to reshuffle her staff to regain public confidence.

When a reporter asked her to confirm whether Chung was “really a hidden power,” she repeated what she said in early December in a meeting with Saenuri Party leaders: Chung left her years earlier, which makes it impossible for him to be an influential figure in today’s Blue House.

“He has no relationship with state affairs whatsoever,” Park said, adding the question was not even worth answering.

Instead of a reshuffle, Park unveiled a plan to revive the system of “special assistants” within the Blue House, who will complement the roles of existing secretaries and senior secretaries. The system was launched by her father Park Chung Hee, but she ended it to make her Blue House structure as slim as possible. It is likely that the special assistants won’t be stationed at the presidential office full time and the government won’t pay them monthly salaries, according to Blue House sources.

The president took the press conference as an opportunity to express her determination to boost the national economy in the new year, when she enters her third year in office. She donned a red jacket, which she formerly described as an “official garment for economic revitalization.”

Red has been her signature color ever since she launched her presidential campaign. She mentioned the term “economy” 42 times, up 18 times from last year’s speech, and uttered “reform” 13 times and “innovation” 11 times. But she did not come up with any groundbreaking message or plan - contrary to last year, when she made the notable comment that “unification will be a jackpot” for South Korea.

It was followed by a question-and-answer session with the press. Sixteen reporters, including one foreign correspondent, asked her questions, four more than last year. To avoid criticism that the Blue House and its correspondents conspired to make questions easy for the president to answer - which occurred last year - the reporters maintained secrecy about their questions until the last minute.

The Blue House also stopped seating reporters behind tables. This time, the presidential office removed all desks to allow reporters to sit in an oval, thus creating a more open atmosphere and facilitating “communication,” which Park is frequently criticized for being poor at.

The political community had a mixed response to the press conference. Whereas the ruling Saenuri Party stressed the president’s determination to boost the economy and improve ties with North Korea, the main opposition New Politics Alliance for Democracy (NPAD) lambasted her for “stubbornness and self-praise.”

“President Park has produced a feasible blueprint for a ‘New Korea’ under the idea that this year, when no national elections are scheduled, is the optimal time for resuscitation and innovation,” said Saenuri spokesman Park Dae-chul.

The NPAD’s senior spokesman Yoo Ki-hong said, “Koreans paid attention to the press conference with anticipation that President Park would offer a message of hope and communication. But it has turned out to be one of despair and disrupted communication.”