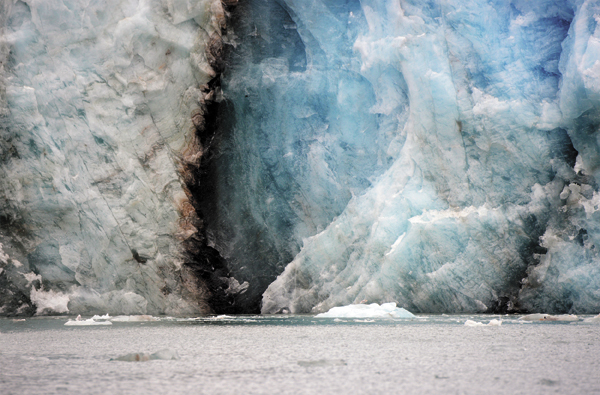 Han Sungpil’s latest photographic series “Weight of Time”(2013), which includes “Weight of Time VI,” above, focuses on the layers of time condensed and frozen in the glaciers of Earth’s polar regions. It is part of the artist’s solo exhibition, which is currently at Arario Gallery Seoul in the art zone east of Gyeongbok Palace until Feb. 22. Provided by the gallery

When we hear about the Earth’s polar regions, we automatically recall images of bluish white glaciers, sublime skies, waddling penguins or fluffy polar bears. But is that all there is to these areas?

The new solo exhibition “Polar Heir” by artist Han Sungpil at Arario Gallery Seoul begs to differ. About 20 photographs on display, which Han took during explorations of the Arctic and Antarctic in the last two years, do not include these animals. 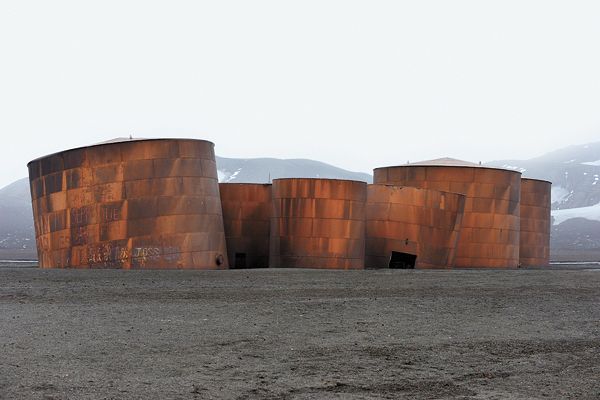 Han’s “Deception Island” series (2014) shows the ruins of a whaling station partly buried in volcanic ash on Deception Island in the Antarctic Ocean. The photos shatter our illusions about the polar regions- white fields untouched by humans - and show a new kind of sublimity away from the power of time.

Some of his photos don’t even seem like they were taken in the icy regions. Among them is the “Deception Island” series, which shows the ruins of partly buried reddish-brown structures. The buildings seem as if they were created by a contemporary artist or a stylish architect.

“They were containers that stored whale oil and other structures of a whaling station in the early 20th century,” Han, 43, explained. “I took the photos at Deception Island in the Antarctic Ocean. The polar regions were the target of exploitation by whaling and mining businesses for centuries.” 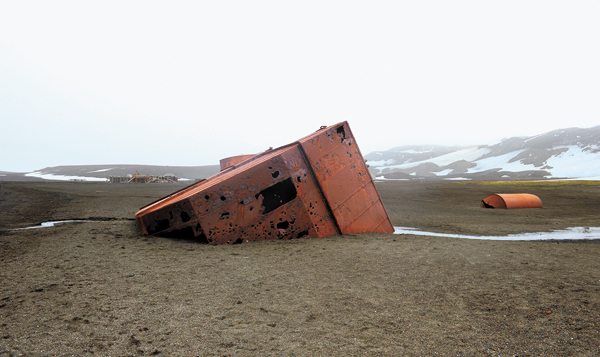 Han’s “Deception Island” series (2014) shows the ruins of a whaling station partly buried in volcanic ash on Deception Island in the Antarctic Ocean. The photos shatter our illusions about the polar regions- white fields untouched by humans - and show a new kind of sublimity away from the power of time.

According to the artist, people wrongly think these areas have remained nearly untouched by humans.

“But if you go there, you will feel strange seeing much more of the vestiges of humans and artificial structures than expected,” he explained.

In this aspect, Han’s new work in the “Polar Heir” exhibition is linked to the artist’s former “Facade” series, which brought him fame.

The latter collection shows buildings around the world that are under construction or repair and are covered with screens that carry images of the completed buildings. The artist questions the relationship between the original and the replica and between reality and illusion with the elaborate photos, in which it is hard to tell where the screens end and the surrounding environment begins.

Han’s new photos also question the gap and connection between our self-deception about the polar regions and the reality.

The artist said he was also impressed by “the layers of time, accumulated, condensed and frozen in glaciers and its vast dimension,” on his travels.

His “Weight of Time” series, which is among the work on display at the exhibition, focuses on this, as does his “Deception Island” collection.

In the series, the ruins of the whaling station buried in volcanic ash depict the flow of time and prove that nature will always inversely conquer humans in the long run.

The station closed due to the whale oil price slump and was taken over for scientific research in 1944. But it was later destroyed by volcanic activity in the late 1960s, the artist said.

Accordingly, Han discovers a new perspective of the sublime in the polar regions. But it is not the typical sublimity we imagine we would receive from an extensive space untouched by humans. Rather, it is a new sublimity resulting from the extensive dimension of time, which human history is just a small part of.

“Nature is no longer in the domain of the sublime,” wrote art critic Chin Jungk-won regarding this.

“In the works of Han, there seems to be the intention of recovering the dignity of nature, a nature that has been undergoing the visual exploitation of man’s intellectual curiosity. It is as if the work is trying to tell us that no matter how great our avarice is, how great our technology is, we are, after all, finite beings, destined to one day be buried in the even greater arms of Mother Nature.”