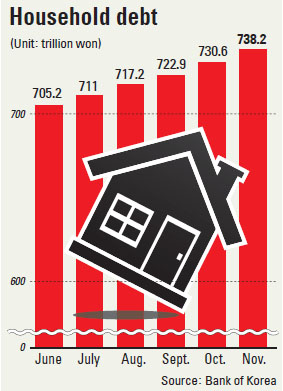 While the market is confident that there will be another rate cut due to President Park Geun-hye’s economic comments made during her New Year’s address, household debt continued to grow at an alarming rate in November.

According to the Bank of Korea on Tuesday, household debts in November increased by 7.5 trillion won ($6.8 billion) compared to the previous month, raising the total of household debt — which does not include purchases made by credit cards — to 738.2 trillion won.

This is the second-biggest month-on-month increase of household debt on record, after October, when debt increased by 7.8 trillion won worth of fresh loans.

The sharp increase in household loans is considered to be the result of the central bank’s key interest rate cuts made in August and October last year as part of the government’s campaign to “preemptively” prevent the economy from decelerating. The central bank shaved 0.25 p
ercentage point off the key rate in each month, bringing it to a low of 2 percent. The last time the interest rate was at 2 percent was in 2009, when the Korean economy was hit by the global crisis.

The increase in loans comes at a time when the market is already expecting the central bank to make an additional rate cut, dropping the key interest rate to 1.75 percent. Many experts expect the move to take place late in the first quarter or early in the second quarter.
BOK Gov. Lee Ju-yeol has not said whether he will make a decision that will follow market expectations, but President Park indicated during her New Year’s press conference on Monday that the BOK should make a rate cut.

“[The government] will ensure that macroeconomic policy organizations collaborate to come up with timely responses,” she said.

Many market experts believe that the central bank will keep the interest rate at its current level during its monthly monetary committee meeting on Thursday. But the president’s comment was seen as an assurance that the rate would be lowered in the near future.

Many analysts believe that the extra rate cut will encourage more people to take out loans. Some say it is a positive sign because, in the current economic situation, one of the best ways to revive the economy is to encourage spending through loans.

However, other analysts see the rapidly rising household debt as a risk.