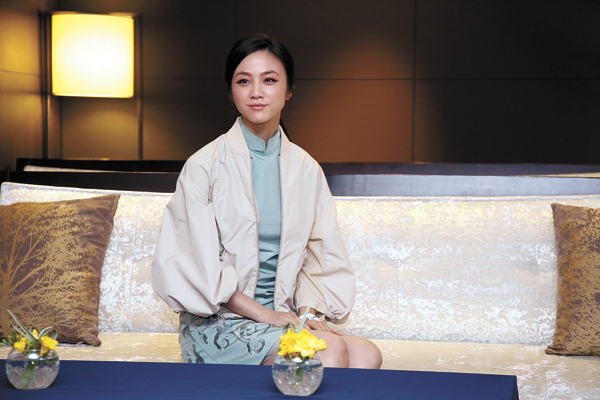 Chinese actress Tang Wei poses for a photo at Coex Intercontinental Hotel in southern Seoul on Monday prior to attending CICI Korea’s awards ceremony, where she received a Stepping Stone Bridge Award.Provided by the CICI

Tang Wei initially gained recognition with her risque role in Ang Lee’s “Lust, Caution” in 2007. But the Chinese actress was still considered a distant star to many Korean viewers.

However, after she starred in director Kim Tae-yong’s “Late Autumn” in 2010 and married him last year, Tang became one of the most admired Chinese actresses in Korea.

It even won her the pet name “Pangyo-daek.”

Pangyo refers to the place where Tang lived when she first came to Korea while daek is a formal name for a resident of an area.

And the friendly nickname is not the only thing she has earned here. On Monday, Tang was honored with the Stepping Stone Bridge Award from the annual CICI Korea ceremony, which gives prizes to people considered to have contributed to promoting Korean culture.

“I am so honored that many Koreans love me,” said the 35-year-old actress in an interview with local reporters prior to the ceremony. “As an actress, I think my role is to act as a stepping-stone to devote myself to my roles in various good-quality films.”

Tang also added that “creating a synergy effect” is another part of her role as a stepping-stone within the movie-making process.

“When my partner is in a bad mood and I feel good, I want to convey a positive energy to my colleagues and let them use that energy,” Tang said.

“I have been lucky to have worked with such great directors and actors. Through them, I have become a more active actress compared to before. Things that I’ve learned from my experiences are being realized now.”

As an actress from China, which has a rapidly growing domestic movie industry - stringent regulations notwithstanding - Tang said that more change is to be expected in her home country in the future.

“In an era where resources are overflowing within the market, exchanges between the West and East are inevitable,” she said.

“And the more there are interactions, the more that good-quality movies will be born. Personally, I want to use the term ‘reorganization’ for the way that resources will be allocated.”

When asked about the prospects for Chinese independent film, Tang said that the indie and commercial sectors are becoming distinctly divided, which she thinks is a good sign.

“Before, art and commercial films were all in one, but now people are paying more attention to art films and want to invest in them,” she explained.

“We won’t be philosophical [like in European art movies], but we have our own culture. Mix everything together and it will definitely happen in the future. We just have to be patient.”

Although the young actress possesses a profound understanding and ambition regarding her career, she still acts like a shy newlywed in real life.

“I have been so busy that I haven’t had a chance to spend much time with Kim, so my Korean skills are still the same,” she laughed. “When I have to talk to my mother-in-law, I communicate through director Kim [in English] or with my body language.

“But the food she cooks is the best,” she added.

When asked about any future plans, she said that she wants to take a break and learn other languages.

Regarding married life, Tang said, “I have to figure out how to live my life well with my new status now. [Having children] won’t be possible right now because I am working, but in the future I want to go through all the stuff that an ordinary woman goes through.”