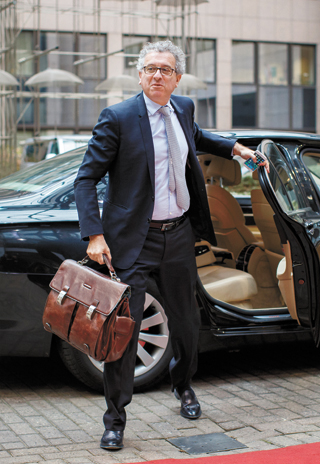 Pierre Gramegna, the minister of finance in Luxembourg, promised plenty of support for the Korean financial technology companies he met during his two-day visit to Seoul.
In an interview with the Korea JoongAng Daily on Tuesday, Gramegna trumpeted his country as an active international actor in the financial industry and boasted of recent growth of the fintech industry, companies that provide financial services with an emphasis on technology.
The minister attended a forum on the fintech industry on Monday held at Coex in Samseong-dong, southern Seoul, and met with around 20 Korean fintech companies.
Gramegna was Luxembourg’s ambassador to Korea from 1996 through 2002. Impressed by the changes and growth that he has seen in the country, he decided to put Korea on his priority list to visit since he became the finance minister a year ago.
“If they want to look for financial partners or just potential partners with similar goals, or if they want to look for some R&D support, we can offer all of them,” Gramegna said. “All the Korean fintech companies I met yesterday were very keen.”
Luxembourg is pushing for deregulation for fintech companies in particular, which are mostly start-ups and don’t need much capital because they work on computers and the Internet.
The current minimum capital required for a new business is 12,000 euros ($14,000), but companies considering choosing Luxembourg as a destination need not worry because the Luxembourg parliament is currently working on a bill that lowers that amount.
Fintech companies will be able to create businesses in Luxembourg with as little as 1 euro, the minister told representatives of Korean fintech companies on Monday.
Companies from all industries can benefit from a variety of financial incentives and wide access to funding in the country.
“In the area of intellectual property, companies that raise revenues through their intellectual property rights will be subject to tax exemptions,” the minister said. “They will also be eligible for direct loans from the European Investment Bank.”
The Luxembourg government is trying to make fintech a major industry for the country. There are about 150 companies and 10,000 jobs in the fintech industry in Luxembourg. About 20 percent of the companies are leaders in the field.
Fintech, a new field of financial services boosted by the use of mobile devices, in something the Korean financial authority is also highly interested in.
Gramegna met with Mayor Park Won-soon of Seoul and Chairman Shin Je-yoon of the Financial Services Commission on Monday to promise cooperation to make Seoul an international financial hub.
“We want to enhance bilateral cooperation with Korea,” he said. “We both recognized that there are lots of things that we can learn from each other.”
Luxembourg is known for its international financial center, the minister underscored.
It has a strong private banking sector consisting of 150 banks. Currently, there are three Chinese banks located in the country and another three are planning to open branches there.
Despite the Luxembourg government’s move to abolish bank secrecy in November and pursue transparency in terms of taxation, there has been no outflow of funds from the private banking industry, the minister stressed.
“We are the No. 1 renimbi center in Europe, which is a strong point of interest for Korea,” he said.
The country’s investment fund industry is also on a growth path, expanding by more than 10 percent annually. Last November, net assets under management surpassed 3,000 billion euros, he said, making it the second-largest investment fund manager after the United States.
Gramegna pointed out that all the players in his country’s financial industry are foreign, which has led to real internationalization of finance.
“The missing link is Korean banks, and now we think the time is right for Korean banks to consider re-positioning in Luxembourg,” Gramegna said.
There used to be some Korean banks there but most of them because of the Asian financial crisis of the late 1990s.