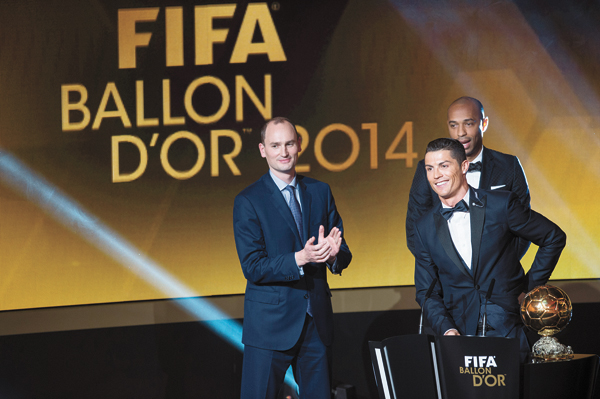 Cristiano Ronaldo, right, wins the FIFA men’s Ballon d’Or 2014 prize at an awards ceremony at the Kongresshaus in Zurich on Monday.[AP/NEWSIS]

For the third time, Cristiano Ronaldo was voted the world’s best football player. He hopes it also brought him closer to being remembered as one of the greatest of all time.

Ronaldo won the FIFA Ballon d’Or in a rout on Monday, racking up more than twice the votes of Lionel Messi, who edged German goalkeeper Manuel Neuer into third.

Only Messi’s four FIFA awards is ahead of the 29-year-old Ronaldo, whose Madrid team again seems better placed for trophies in 2015 than his rival’s Barcelona.

“I want to become one of the greatest players of all time,’’ Ronaldo said through a translator in his acceptance speech. “Of course, this requires a lot of effort and I hope to get there.’’

He has kept up the pace since FIFA’s voting college - national team captains and coaches, plus selected journalists, in more than 180 countries took part - cast ballots in November.

“It’s a fantastic moment in my career,’’ Ronaldo said after the FIFA ceremony. “I want to carry on with more titles in my career, collective and individual.’’

He won his first FIFA award in 2008 as a Manchester United player.