Base pay talks concluded by 44% of companies

Base pay talks concluded by 44% of companies 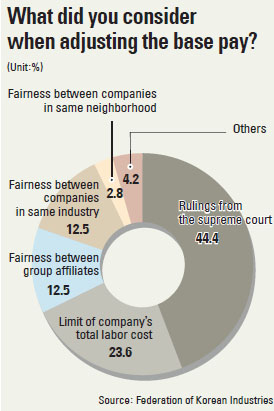 Less than half of conglomerates reached an agreement with their unions over base pay last year, a survey from the Federation of Korean Industries (FKI) showed Tuesday.
According to the business group that represents major corporations, only 44 percent of companies said that they raised base pay after talks with their union. FKI said that it asked the nation’s top 300 companies by revenue and 100 responded.
Of the 44 that raised base pay, 34 companies, or 77.3 percent, answered that they had increased base pay by an average of 17.9 percent.
Base wage is the foundation for calculating allowances such as overtime pay and pension. Labor unions have been claiming that regularly paid bonuses should be counted as part of base wage.
A separate survey by the Korea Employers’ Federation in November of about 6,000 companies showed that on average, base pay increase by 13.8 percent last year.
Among companies that adjusted their base wage, 44.4 percent said that a decision from the Supreme Court had the biggest effect on their decision, while 23.6 percent said they considered their budget for labor costs. Others said they decided to raise wages to match other companies.
According to the survey, nine companies are still awaiting a court decision regarding a base pay lawsuit, while three said they had already complete the process or that the lawsuit had been withdrawn.
FKI said in its report that many businesses are also concerned over inconsistencies between lower and higher court rulings regarding base pay issues.
In the survey, 38 percent of them said that they are worried that inconsistent rulings by each court will worsen the labor-management relationship, and others said they are concerned that unions will turn to the court instead of talking with management first.
“Although most companies have completed their wage negotiations, less than half of them have not finalized the base pay issue, which shows that the topic is still a hot potato for many,” said Lee Cheol-hang, who leads FKI’s labor management team.

BY JOO KYUNG-DON [kjoo@joongang.co.kr]