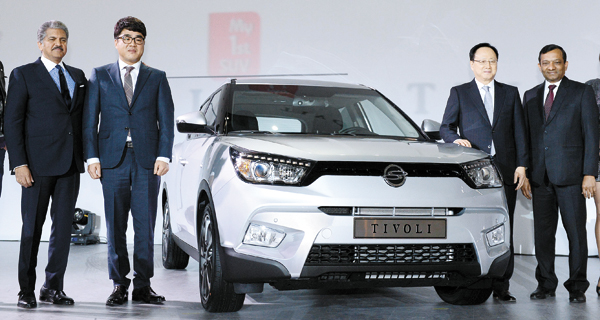 From left: Anand Mahindra, chairman of Mahindra Group; Kim Kyu-han, head of Ssangyong Motor’s labor union; Ssangyong CEO Lee Yoo-il; and Pawan Goenka, executive director and president of the automotive and farm equipment division of Mahindra, were present at the launch of the Tivoli SUV on Tuesday at Dongdaemun Design Plaza in central Seoul. Provided by the company

Will the estrangement between fired factory workers and Ssangyong Motor management finally end after six years and the 4,500 former employees get their jobs back?
For now, reinstatement of former employees who lost their jobs in 2009 after a 77-day strike that ended violently seems unlikely.
“I am aware of this protest [by former Ssangyong Motor employees] that is going on. I’m deeply concerned about the situation of the people who lost their jobs and my heart is fully engaged with them and their families,” said Arnand Mahindra, chairman of the Indian automotive group Mahindra, on Tuesday.
He was in Seoul to attend the unveiling of the Korean automaker’s latest compact SUV, the Tivoli, at the Dongdaemun Design Center. He even posed for a photo with the head of Ssangyong’s labor union.
“I come from a company where the culture is to care. We believe in sotong [which means ‘communication’ in Korean]. We always plan to work with the communities we are operating,” he added.
But Mahindra made it clear the company has no plans to reinstate the former Ssangyong Motors factory workers until the Korean automotive company gets out of the red.
He said he believes in sharing wealth and profit, but first there needs to be profit. And although the Korean automaker has made a successful comeback from court receivership, he made it clear there are still challenges ahead.
“As an investor in Ssangyong, it would be irresponsible for me to make a short-term decision due to pressures I receive,” said Mahindra. “Ssangyong has many challenges. If it makes some improvements, possibly with the Tivoli we launched today, finally let me carefully say, if the Tivoli is successful, and if we perform better in other businesses as well, we will certainly bring back those people who lost their jobs in 2009.”
The chairman also expressed his faith in the current management, in particular CEO Lee Yoo-il.
“As an investor in Ssangyong, our first concern is to trust Ssangyong’s management, which has been trying very hard to normalize the company,” said Mahindra.
When asked about the company’s plan for the former factory workers, the Korean CEO made it clear that they were people who chose to walk out of the company.
“In the agreement [with the head of the labor union at the time], there were no forced layoffs,” said Lee. “In 2009, the head of the labor union and I agreed that among the 900 employees who stayed at the plant [during the strike] until the last moment, 52 percent would be on leave of absence with no pay and the other 48 percent would be in voluntary retirement.”
As the elaborate Tivoli launch ceremony was going on inside the Dongdaemun landmark, the former factory workers were picketing outside as about 20 riot police officers with plastic shields blocked the entrance to the event.
“Do you know about the 26 pairs of shoes that disappeared [that belonged to 26 workers who died after the firings]?” read one of the picket signs.
Ssangyong Motor went into court receivership in February 2009, and two months later management led by the court-appointed Lee Yoo-il laid out a restructuring plan that included layoffs of 2,646 employees, or 37 percent of the work force.
Enraged by the plan, Ssangyong’s union began a strike on April 23, 2009, at the company’s plant in Pyeongtaek that ultimately lasted 77 days. In the meantime, 1,904 workers voluntarily retired and 454 took unpaid leave. Among those fired, 153 filed a wrongful termination suit against the automaker in November 2010.
In November, however, the Supreme Court overturned a Seoul High Court ruling that Ssangyong Motor must take back 153 workers fired in 2009 and sent the case back to the lower court for retrial. Since the layoffs, 26 people, including spouses, have died.

BY KWON SANG-SOO [sakwon@joongang.co.kr]