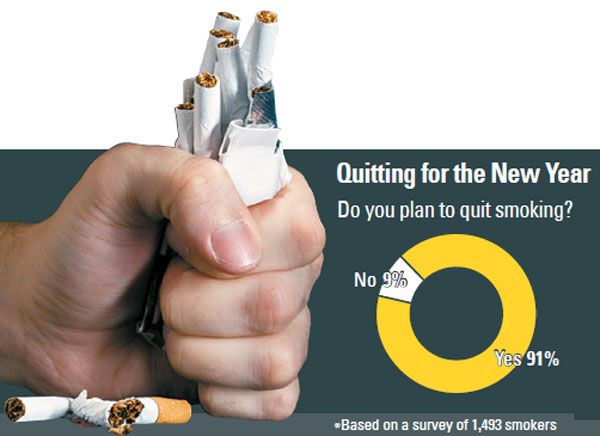 At the start of a new year, smokers often resolve to quit, which requires persistence and support. But this year, a large hike in the tobacco tax that took effect Jan. 1 is enough of a reason to make many Koreans commit to giving up.
Nine out of 10 smokers decided to quit this year, according to a survey by Gmarket, with many people citing the 2,000 won ($1.80) price increase per pack as a motivating factor. In the survey of 1,493 male and female smokers conducted from Dec. 29 through Jan. 11, 91 percent of respondents said they have plans to stop smoking. The people surveyed were all subscribers to the leading e-commerce market, which is operated by eBay Korea.
Of those who said they want to quit, 70 percent cited the price hike as the main reason behind their decision.
When asked what encouraged them to quit, a question that allowed multiple answers, 43 percent also mentioned health concerns.
Fifteen percent said social pressure played a role in their quitting and 10 percent said they were worried about their family members’ health due to second-hand smoke.
As a method to stop smoking, 36 percent responded that they would suppress their cravings for cigarettes without relying on any particular product to aid them. Twenty-four percent said they would pick up sweets instead and 21 percent planned to turn to electronic cigarettes.
Major online retailers reported a drastic increase in e-cigarette sales.
Gmarket said that in December, sales of e-cigarettes surged 70 percent compared to the same month last year.
But the Ministry of Health and Welfare issued a warning earlier this month that some artificial cigarettes contain a comparable amount of acetaldehyde, a cancer-causing substance, as regular cigarettes, though it did not list specific products.
While some smokers try to stop, others look for cheaper cigarettes, which are available at duty-free shops because they are exempt from the tax for the time. However, the Ministry of Strategy and Finance announced on Monday that it will soon extend the tax to include duty-free shops.