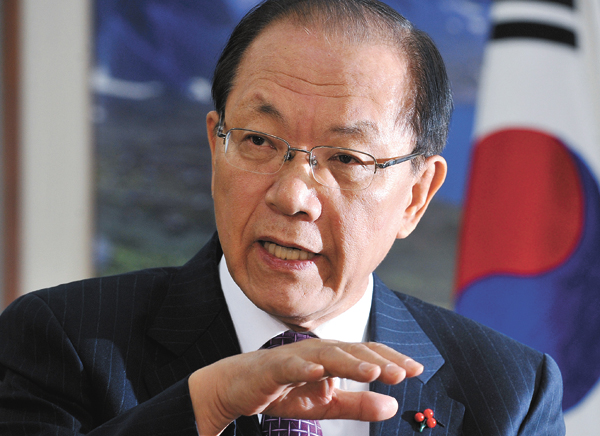 Education Minister Hwang Woo-yea is a proponent of a new sort of reform plan that would break free from the May 31 Educational Reform of 1995, the educational model of the past two decades.

“The May 31 Educational Reform, centered on competition, was geared toward globalization and an information-oriented society, and that has been achieved,” said Hwang, who is also the deputy prime minister for education, culture and society.

He spoke to the JoongAng Ilbo last Wednesday, five months after becoming minister.

The reform of 1995, the basis of the current system in Korea, strengthened education across the board with a focus on high-tech information and communication and foreign languages. It also introduced a comprehensive graduate record system and evaluation measures.

“However, there is concern over key problems in our society such as a high suicide rate and divorce rate, as well as low fertility,” he said. “In order to overcome this, we need an education that looks beyond performance and results and produces the feeling of happiness, and to do this, character and vocational education needs to be bolstered.

“Looking at colleges and other teacher training institutions, they produce too many graduates by 1,600 percent, who have nowhere to go, and we are in a situation where our universities produce more German literature majors than Germany itself.”

Hwang, a longtime proponent of education reform, was previously a five-term lawmaker and chairman of the Grand National Party (GNP), the precursor to the ruling Saenuri Party.

“Through double and multiple majors, [students] need to find employment in other areas, or we need to encourage universities to adjust their student bodies to match industry demands by providing incentives of as much as 50 billion won [$46.2 million] starting from 2016,” he said.

Hwang has been a strong proponent of vocational and technical training to prepare young Koreans for the job market and has proposed that in order to encourage students to pursue such a track, they should be provided with field experience in a company or institution for a semester in exchange for academic credit starting this year.

In regard to the policy on university applications, a source of great stress for college-bound high school students, Hwang said, “We will build a system where it is possible for students to enter college through their school education alone.”

Many students pour numerous hours and their families’ money into private education to help them ace the dreaded annual College Scholastic Ability Test (CSAT). The Education Ministry last month announced it will adopt an absolute grading system for the English section of the CSAT from 2017, ditching the relative grading system for the first time in the test’s 20-year history.

“It is desirable that universities select incoming students based on their high school grade point average,” said Hwang.

He also said that a policy mandating half-price college tuition based on income will likely be implemented this year, but that in order to ease the burden on universities, he is considering a separate organization that will be established in order to raise funds for colleges. Hwang, as the floor leader of the GNP in 2011 during the Lee Myung-bak administration, was the first lawmaker to push for the half-price tuition plan.

Q. Since you came into your post, you have proposed a new educational philosophy to replace the May 31 plan. What is your idea and direction?

A. For the past 20 years, the May 31 Educational Reform focused on meeting the challenges of an era of globalization, democratization and the spread of information to train excellent talent. However, there has been criticism that this has brought about endless competition based on knowledge, school grades, academic inflation and other issues. Regardless of achievements, the people’s happiness level was low, thus, we need a new educational reform to carry us through the next 30 years. I plan to make concrete the concept in the last presidential elections that the people agreed on, “happiness education that nurtures dreams and talents.” Character and vocational education will be at the center of this.

Recently, the National Assembly passed a character education promotion act, but how exactly do you plan to bolster character?

Instead of acquiring knowledge, it will be more important to be able to use that knowledge in the future to solve a problem or reach an agreement. Training young people will be the basics of character education. Everybody should have equal opportunities in early education. In middle school, stages are especially important. From 2016, a “free semester system” will be implemented in all middle schools. [The system involves an activity-oriented semester designed to teach students through a broad range of engaging methods such as discussion, outdoor activities and team projects, and puts less emphasis on test scores]. As this becomes institutionalized, humanities and natural science education also will be changed.

It is difficult to separate an education system that “nurtures dreams and talents” from the college application process. Following the CSAT English section, are there other subjects that will lose their bell curve?

A CSAT reform committee will make a plan by March next year in order to prevent errors in the grading of the CSAT and to better stabilize the test. However, the bigger issue is what sort of role the CSAT will play. Because the state decides the academic level by stage, there is already an absolute standard. If this standard is graded on a curve, there can be limitless competition because students cannot rest assured they will rank in the top level. But if questions beyond the curriculum are issued in order to create some sort of distinction, this will go against the basis of the kind of educational system that we are trying to pursue. First, we will try an absolute grading system for English, and then we will study the results of that first.

There seems to be a serious mismatch between college graduates and the kind of talent that the industry wants.

The importance of humanities is being touted, as is the nature of innovation. However, it is clear there is an imbalance in the industry sector. Such an example is the lack of IT personnel. We will induce changes in the student body through reforms with the university departments through our project to adjust the student body in universities to match industry demands by 2016.

Though we speak of a need for structural reform in universities, some point out that a general reduction in the student body would not be desirable, either.

Realistically, there is a need for restructuring. At that same time, this will be a golden opportunity for colleges to attract diverse types of students. We plan to attract 30,000 foreign students by 2019 and are in the process of reviewing an act to enable overseas compatriots and workers’ families to study abroad in Korea.