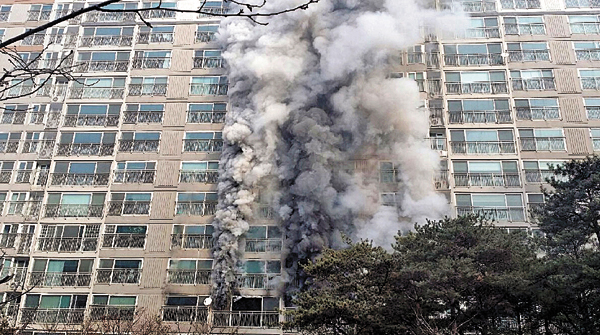 A fire broke out at 9:58 a.m. Tuesday in an apartment in Yangju, Gyeonggi. Two residents were killed in the blaze. [NEWSIS]

A fire that broke out in an apartment on Tuesday in Yangju, Gyeonggi, left two people dead and three hospitalized, authorities said.

According to the Yangju Fire Station, the blaze occurred on the fourth floor of the apartment building at about 9:58 a.m., and was extinguished by 10:51 a.m.

The victims were a 23-year-old man surnamed Hwang and his 28-year-old sister.

Hwang was found dead at the scene and his sister was sent to a local hospital, where she was pronounced dead at 2:10 p.m.

The cause of the fire is currently under investigation, an official from the fire station said.

The blaze did not spread to other units in building because firewalls had been constructed in each apartment, the official added.

Smoke from the fire spread to the upper floor, however, resulting in the hospitalization of three people for smoke inhalation.

Another fire also occurred the same day around 12:30 p.m. on the 10th floor of a 20-story apartment building in Namyangju, Gyeonggi, just 26 kilometers (16 miles) from where the incident in Yangju took place.

Four residents were hospitalized due to smoke from the fire.

The flames were brought under control in about an hour, at 1:36 p.m., and the cause is still being investigated, an official of the Namyangju Fire Station said. Police currently suspect the blaze was sparked by a kimchi refrigerator in an apartment unit, based on residents’ statements.

On Saturday, a fire ripped through three apartment buildings in Uijeongbu, Gyeonggi, as well as a four-story parking lot and two low-rise residential buildings.

The blaze, initiated after a motorcycle caught on fire, climbed up the outer wall, affecting three nearby apartments.