Government resolves to open up the banking sector

Government resolves to open up the banking sector 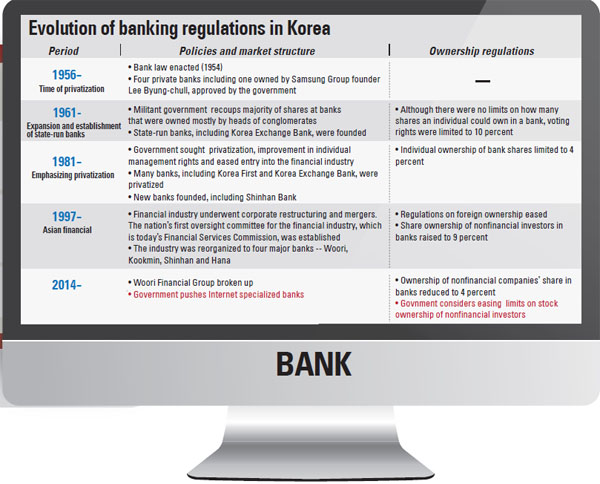 At a financial industry ceremony celebrating New Year’s in downtown Seoul on Jan. 5, Finance Minister Choi Kyung-hwan said one government resolution is to increase innovation and competitiveness in the financial industry by introducing smaller, agile players to the market.

The comment was a reference to Internet banks, which have no branches or tellers and operate mainly online. Such banks already operate overseas: Ally Bank was established by GM in 2004, and Sony Bank was founded in 2001 in Japan.

The Financial Services Commission already formed a task force that held its first meeting last week. The task force will review and research the viability of Internet banks in Korea by March and submit a proposal by the end of June. The target is to revise the bill in the second half and launch the first Internet-exclusive bank by the end of the year.

The plan comes at a time when the global banking industry is rapidly changing, especially with the development of fintech, or financial technology. 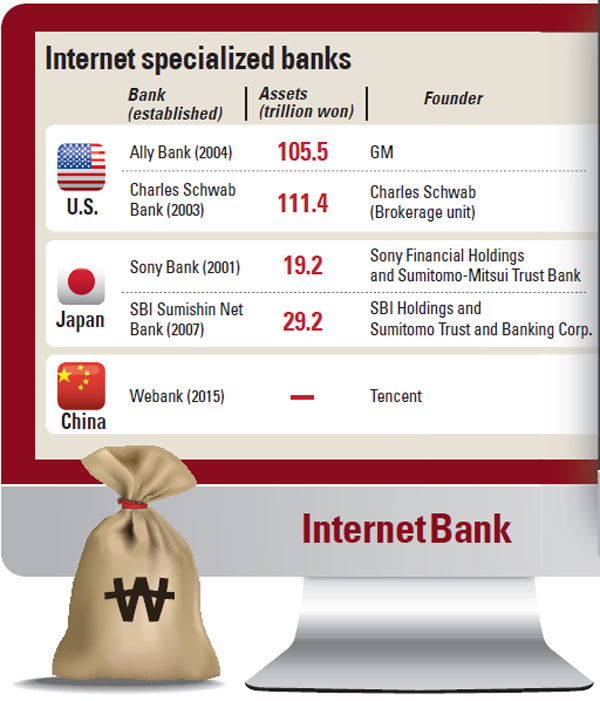 Tencent, Alibaba, Apple and other IT companies are already entering the financial market, and Korea’s Daum Kakao launched its own mobile pay service in the second half of 2014.

The banking industry has become the government’s “innovation” target, as it is currently an oligopoly in which a few players dominate the market.

This is a structure born after the Asian financial crisis of the late 1990s that forced many banks and financial companies to either shut down or merge into large groups. It was at this time that Shinhan and Hana banks bulked up.

In addition, starting with Woori Bank in 2001 the local banking industry adopted a holding company system.

“Our bank is so big we could rake in 1 to 2 trillion won in net profit a year with no extra effort,” a bank CEO once said. “That’s why there are no reasons for us to rush into seeking changes in the high-cost structure or aggressively expanding overseas.”

The biggest challenge for the government in adding Internet-exclusive banks will be making changes to regulations that prevent the entry of nonfinancial companies. The government has been limiting the control of nonfinancial banking companies so they wouldn’t be used as personal piggy banks for chaebol families.

Under current law, nonfinancial companies own 4 percent of banks’ stocks. These companies could extend their ownership by 10 percent if approved by the FSC. However, they would still be limited as they could only exercise 4 percent of voting rights. Under the law, IT companies that are rising as potential new players in the banking industry with fintechs are restricted from entering the industry.

Even if IT companies want to enter the nonbanking financial industry, including insurance, brokerages and credit cards, they are blocked by nonfinancial conglomerates that are major stakeholders of such businesses.

The only companies able to create an exclusive online bank would be those created by existing banks.

“Even if we ease the regulation, it is would be adequate to limit conglomerates,” said an FSC official.

The official meant that even if a Naver bank or Daum Kakao bank could be created, we wouldn’t be seeing the establishment of a Samsung bank or a Hyundai Motor bank.

There is also discussion of limiting the business portfolio that Internet-exclusive banks can access or the loans they could offer.

Already nonbanking financial companies and IT companies are showing interest.

But the FSC expects that pushing for Internet-exclusive banks won’t be easy. One of the biggest challenges will be winning public support.

This is not the first time the government has tried to create a policy that would be a foundation for establishing online banks.

In 2008, the government under the Lee Myung-bak administration submitted a revised banking industry law to the National Assembly. But the revised bill that passed the Assembly in 2010 did not include online banks.

Stricter regulation and oversight of the financial industry in the wake of the global financial crisis was the primary reason.

Additionally, the public has been concerned over one individual having the majority control over any bank. This was one of the reasons why the FSC, aware of public sentiment, expressed uneasiness about Kyobo Life Insurance’s interest in buying a majority stake in Woori Bank.

The biggest challenge for newcomers would be settling smoothly into the local market.

The retail finance market in Korea is not as big as those in advanced economies like the United States, and it is not a growing market like in China.

But the quality of services provided by existing banks is high and the network is strong. In other words, the niche market for new players will likely be limited.

What was intended to be a major player and an alternative to established bank giants could end up competing with savings banks and loan sharks in the small-loan market.