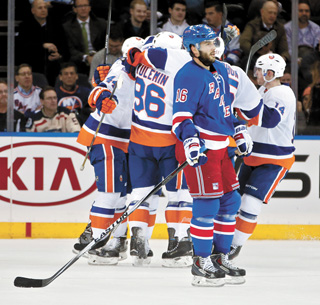 All the accolades and platitudes the New York Rangers received during their recent three-game California sweep were quickly transferred to the rival New York Islanders, who dismantled the Broadway Blueshirts upon their return to Madison Square Garden.

Undaunted and unfazed by the positive press heaped onto the Rangers, the Islanders made yet another statement in their surprisingly successful season. They vaulted to the top of the Eastern Conference on Tuesday night with a 3-0 win over the previously surging Rangers.

Frans Nielsen’s short-handed tally capped the Islanders’ three-goal second period, Jaroslav Halak made 27 saves in his fourth shutout of the season and the Islanders stretched their winning streak to three.

“We have a lot of hockey left,’’ said Islanders Coach Jack Capuano. “This was a big game with a lot of media attention, and I thought we played well.

“For us, it’s about getting the two points. To play a team that is playing so well, and for them to come off the trip they came off, it gives the guys confidence that they can play against good hockey teams.’’

The Islanders jumped over Tampa Bay for the top spot in the East, and maintained a one point lead in the Metropolitan Division over the Pittsburgh Penguins, whom they will host Friday.

“We recognize we’re battling for the top of the division and the conference,’’ Islanders captain John Tavares said.

The Rangers had won five straight and 13 of 14 - a run punctuated by their trek through California last week - but the Islanders finished a seven-game road trip with a flourish.

They are 2-0 this season against the Rangers with three meetings remaining and heard chants of “Let’s Go Islanders’’ in the last minute of this one.

Shortly after the Islanders had a goal waved off because of goalie interference, Anders Lee broke the deadlock at 8:49 of the second. Nikolay Kulemin made it 2-0 with 3:39 left, and Nielsen pushed the lead to three with the Islanders’ NHL-leading seventh short-handed goal of the season - but first on the road. That came with 40.9 seconds remaining to put an exclamation point on the dominant frame in which the Islanders had a 19-12 shot advantage.

“We kept our heads on our shoulders and played our game,’’ Lee said. “On the road, you want to play a simple game and really wear them down.’’

Halak improved to 23-8 this season as he posted his 34th NHL shutout.

Henrik Lundqvist and the Rangers fell behind 2-0 at Los Angeles last Thursday before rallying to win. Their previous three-goal deficit was in a 6-3 home loss to Tampa Bay on Dec. 1.

The short-handed goal that squeezed under Lundqvist’s arm was the back-breaker.

“I made a lot of good saves and I felt like I was playing the way I should, but that was a big goal,’’ Lundqvist said. “We’ve been good lately minimizing periods like that and playing hard, but that was a tough outing.’’

Cam Talbot took over in the third for Lundqvist, who stopped 29 of 32 shots. Talbot made 12 saves. Only four times in the previous 15 games had the Rangers allowed as many as three goals.