About two months after eliminating more than 30 percent of its executive posts, the nation’s largest shipbuilder Hyundai Heavy Industries has carried out another large-scale restructuring.

The company said Wednesday it will cut 1,500 administrative workers whose posts are managerial level or higher, starting with voluntary resignations.

It wants to cut 15 percent of its 10,000 administrative workers.

“The measure was very necessary,” a spokesman for the company said. “We had about 3.2 trillion won [$2.9 billion] in operating losses from the first to third quarter last year.” 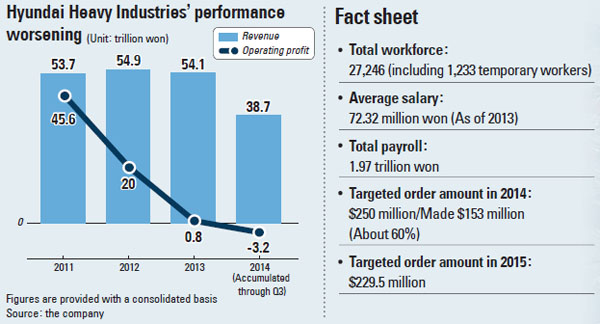 According to the company’s data from 2013, a total of 27,246 employees including 1,233 temporary workers worked for the shipbuilder and their average annual salary was 72.3 million won with a total payroll of 1.9 trillion won.

HHI has been paying employees on a step-based system, a salary structure with standard progressions, but changed to a performance-based system late last year.

It also cut 81 of 262 executives in the company and its affiliates last year, or 31 percent.

The number of business divisions was reduced from 58 to 45 as well, and the number of employees living overseas was reduced. The company’s orders are decreasing as international oil prices continue to fall.

More layoffs are expected if the business climate doesn’t improve.

“I’m not sure of what to do, but I think I should keep my job as long as I can because I’m a father raising two children, and both of them are in kindergarten,” said Kim, 41, a manager at HHI.

The company was once the No. 1 shipbuilder globally in terms of shipbuilding tonnage, but the glory is gone after the company suffered more than 3 trillion won in operating losses in the first three quarters of last year.

The situation isn’t much better for its domestic rivals.

Samsung Heavy Industries also had a hard time due to slumping orders. Daewoo Shipbuilding & Marine Engineering (DSME) performed well in the LNG vessel sector, but isn’t free from the shadow of the global slump in the business.

“Shipbuilders hired more workers in several businesses including the maritime plant business, but since the number of orders decreased recently, it was necessary for them to reduce the work force,” said a spokesman for the Korea Institute for Industrial Economics & Trade.

Samsung and DSME said they have no plans to cut employees for now.

In other manufacturing businesses, the nation’s third-largest automaker General Motors Korea carried out a restructuring plan by accepting voluntary retirements.

Doosan Heavy Industries & Construction is under a restructuring process for 200 administrative workers who are older than 52.

“Companies might consider using a salary peak system [in which the employer extends the employees’ retirement age but lowers their wages beyond a peak amount as they get older] as a temporary measure,” said Prof. Lee Seung-gil from the labor law study department of Ajou University. “But the government needs to provide the ultimate solutions.”