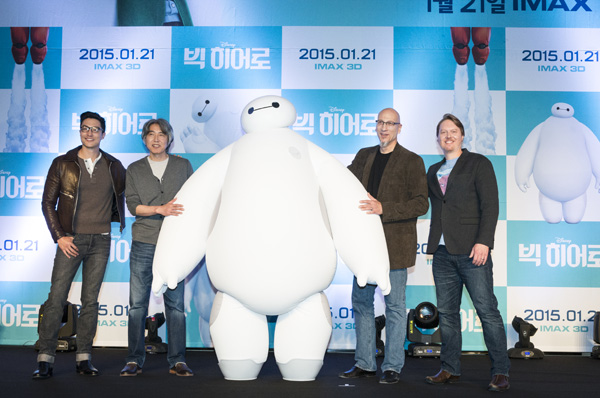 The production team of “Big Hero 6” and actor Daniel Henney pose with Baymax, a robot character from the film, during a press conference at the Conrad Seoul in Yeouido, western Seoul. Provided by Disney

Actor Daniel Henney, well known both in Korea and Hollywood, was also in attendance at a press conference for the movie at the Conrad Seoul in Yeouido, western Seoul.

“It’s a pleasure to visit Korea after I worked with Daniel Henney and Korean designers. It was an amazing experience and I am honored to visit their homeland,” Conli said at the beginning of the event.

Henney, who stars in the lead role as Tadashi, is another reason dozens of local reporters gathered at the conference.

The actor has appeared in popular Korean dramas, including “My Lovely Sam-soon.”

“I was thrilled when I came to Korea to promote the film. I have waited for this moment after the U.S. premiere since I was the only Korean designer at Disney when I started working there,” said Kim.

The heart-warming adventure follows two genius robot brothers and their friend Baymax who work to protect the fictional city of San Fransokyo - a combination of Tokyo and San Francisco.

When asked about the Asian characters Teddy and Gogo, Kim smiled and said, “The title role GoGo is actually motivated by Korean. Korean chief character designer Kim Shi-yoon created her.”

GoGo is the first Korean character in a Disney film, according to the film company. She is voiced by Korean-American actress Jamie Chung.

“Of course, the older brother Teddy looks similar to Daniel because we modified the figure,” Hall said.

Another attraction of the film is that it is Disney’s first jointly created animation with Marvel Entertainment after it acquired the company.

“I think the strength of a Disney movie is how they entail the detailed emotions with a sense of humor, which is something I learned working at the company for over 22 years. But Marvel’s action gives the story more tension,” explained Hall.

When asked about the pressure to match up to the Disney hit “Frozen,” which had runaway success in Korea and elsewhere, Hall had a self-assured attitude. He said that the global popularity of the movie gave him courage, because the way that both films approach the audience is similar.

The film has already topped the box office in the United States and is gathering interest in Korea before its release because of its connections with the country.

Yet outdoing “Frozen” in terms of fame is not guaranteed.

“... A good movie is touching and fun at the same time,” the director said.

“I like ‘Iron Man’ because I love how Robert Downey Jr. knows how to carry on the emotions into spectacular action. ‘Big Hero 6’ is the same. The audience might enjoy the adventure, but they will also be touched.”