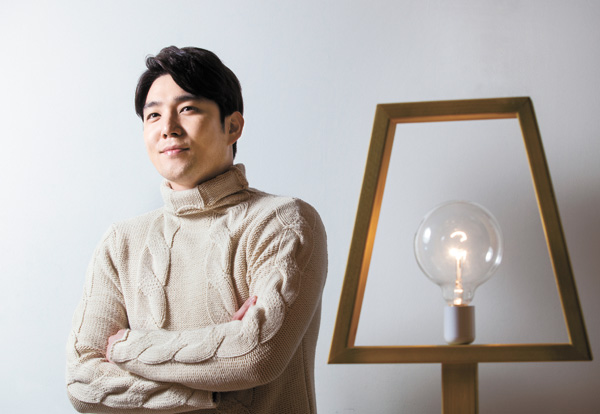 Kang In, a member of K-pop group Super Junior, is widening his horizons with a second film role. “Cat Funeral,” in which he plays the main character, opens on Thursday. He poses for a photo, above, in a cafe in Hannam-dong, central Seoul. By Park Sang-moon

Kang In, a member of long-running K-pop group Super Junior, is as humble and excited as any new actor about his upcoming movie “Cat Funeral.”

“I’m just overwhelmed to have this movie finally open,” said the 28-year-old in a recent interview with the Korea JoongAng Daily on Jan. 8 at a cafe in Hannam-dong, central Seoul.

“As if it’s the day before going on a picnic or the day before Super Junior’s first album came out. I’ve been incredibly excited for a very long time.”

The movie is directed by Lee Jong-hun.

In his second film, which opens in local theaters on Thursday, Kang plays Dong-hoon, an indie musician who struggles with both his career and relationship.

Dong-hoon is dating Jae-hee, played by rising actress Park Se-young, who he fell in love with at first sight.

But after living together for a year and raising a kitten named Gurumi together, which they found on the street, their relationship gradually grows cold and they split up.

When the cat dies, however, Dong-hoon reaches out to Jae-hee and they take off to bury Gurumi on Deokjeok Island, a place that holds a lot of memories for the couple.

Kang’s acting comes off as natural, partially due to the fact that his character is the kind of a guy who doesn’t really express his feelings too much. When Dong-hoon tells Jae-hee he wants to break up with her and when he finds out she has a fiance, he just takes it all in without expressing his feelings.

“There were scenes when I felt like crying, which wasn’t included in the script, such as when I say I will raise Gurumi right after saying farewell to Jae-hee,” Kang said. “But the director told me not to, saying it would be ‘too much.’ He really doesn’t like pretentious acting.”

As a novice, Kang obstinately followed the director’s orders. But despite his effort, he still wasn’t completely comfortable seeing himself on the big screen.

“I still felt awkward when I saw myself on screen and was busy spotting so many of my flaws,” said Kang with a shy laugh.

“People around me feel similar, especially my guy friends. But I received some texts from female friends who watched the movie saying that they empathized with it so much.”

When asked if he channeled any of his personal experiences into portraying Dong-hoon, Kang said he feels almost “regretful” about the fact that he does not have many of them.

“Many people wonder if I am dating anyone after watching the movie, but as boring as it sounds, I’m not, and I can’t even remember the last time I was in a relationship,” he said.

“But when I meet someone I try to be as passionate as possible, create many memories and be spontaneous and playful.”

Kang also said that he became very close to his partner Park, to the point that he felt as if they were brother and sister during the monthlong filming, which took place during the winter of 2013.

“It’s kind of funny that we hugged and kissed each other for the shoot even before we became friends,” Kang recalled. “But later we helped each other a lot, and I asked her for a lot of advice about acting.”

It may still seem ambiguous which label - singer or actor - suits Kang better. However, one thing is clear - the star is taking things slowly, trying to absorb everything that happens along the way. He has welcomed challenges but has not been greedy.

“I know not everyone will like the film. But if anyone who has been in love can empathize with it, even in the most modest way, I will be satisfied and extremely happy,” said Kang.

“I don’t even know how many screens the movie is on right now because I am not interested in that score. Empathy is the only thing I want,”

The entertainer left for Thailand the day after the interview for Super Junior’s world tour and was planning to come back afterward in order to promote the movie in Korea.