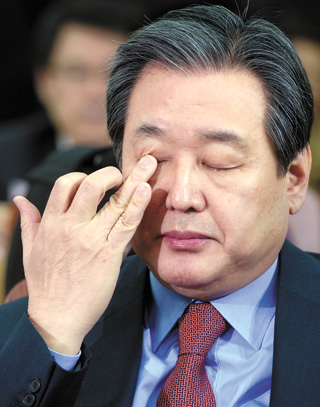 The scrawls of Saenuri Party leader Kim Moo-sung shot accidentally by a news photographer on Monday reignited the political scandal surrounding President Park Geun-hye’s aides, which was triggered in November by a leaked Blue House internal report about internal string-pulling.

The handwritten memo showed two initials and five names of men working at the Blue House or for the Saenuri Party.

A guessing game erupted immediately about the initials, which only got more fevered as Kim and the men named in the memo told different stories.

What is obvious is that the scandal over the leaked confidential report isn’t going away - and it has prompted conflict between the ruling party leadership and the Blue House.

The report leaked by the local daily Segye Ilbo in its Nov. 28 edition alleged that Chung Yoon-hoi, a former aide to President Park during her days as a lawmaker, had been discussing state affairs regularly with 10 Blue House officials and related figures, including three presidential secretaries the report referred to as the “three doorknobs,” an allusion to their control of access to the president. The group of 10 figures was referred to as “Sipsangsi,” a historical allusion to 10 corrupt eunuchs who wielded power under Emperor Ling during the later Han period in ancient China.

The prosecution earlier this month concluded that the confidential Blue House report was a collection of rumors gathered by a senior police officer seconded to the Blue House on order of his then-boss Cho Eung-cheon, a presidential secretary for civil service discipline, who allegedly was trying to help President Park’s brother Ji-man.

Many view the scandal as a behind-the-scenes power struggle between Chung Yoon-hoi and Park Ji-man. President Park has insisted the report was a fabrication by some government officials “out of personal greed.”

Rep. Kim’s memo, caught accidently by the photographer, read, “The masterminds behind the leaked report upheaval are K and Y. I will definitely expose them. There will soon be an announcement.”

Right above that declaration were the names of five Saenuri-related figures: Lee Jun-seok and Son Su-jo, both members of the ruling party who are considered “young blood” in the conservative party; Eum Jong-hwan, an assistant secretary to the president for public relations and planning; Lee Dong-bin, a personal secretary to the president; and “Shin.” It later turned out that name Shin was referring to Shin Yong-hwan, head of the presidential youth committee.

The names for K and Y were revealed after Lee Jun-seok had interviews with several media outlets on Tuesday. Lee, 30, rose to prominence during the presidential election in 2012 after then-candidate Park Geun-hye named him as a member of the Saenuri’s emergency committee.

Lee said those five people mentioned in the note gathered on Dec. 18 and the quote about exposing the masterminds was from Eum Jong-hwan. On Jan. 6, Lee met with party leader Kim and told him what Eum said at the gathering in an intoxicated state. Rep. Kim wrote it down on the notepad, Lee said.

According to Lee, K referred to Kim Moo-sung and Y to Yoo Seong-min, a three-term Saenuri lawmaker. Yoo is widely known to be preparing to run for the floor leader post in a May party election.

But Eum denied Lee’s claim, telling various media outlets that he never said such a “novel-like” quote, although he admitted to attending the Dec. 18 gathering with Lee. The Blue House Wednesday afternoon announced Eum tendered his resignation to take responsibility for stirring up controversy and the presidential office intends to accept it.

Eum, an obscure figure to the general public, was actually a hidden heavyweight within the Blue House who was named as one of the group of court eunuchs that President Park denied existed. Eum, along with seven other Blue House officials mentioned in the leaked report, filed a defamation suit against the Segye Ilbo reporters immediately following the release of their Nov. 28 report. He is a longtime secretary to Saenuri Rep. Lee Jung-hyun, a famous loyalist to the president. He was her mouthpiece when he was serving as senior presidential secretary for public affairs until June last year.

The Blue House said Wednesday it is currently “checking the facts.”

Some insiders familiar with Representative Kim, who is normally highly cautious about security, raised suspicions that he intentionally allowed his notepad to be seen. The 54-year-old Saenuri leader denied that.

“I wrote it down because it was such a ridiculous story,” he said in a New Year’s press conference at the Assembly Wednesday morning. “I didn’t care about it because it didn’t make any sense and a photo was taken when I accidentally unfolded the page while looking for other memos.”

Representative Yoo said in a press release Wednesday he was with Kim on Jan. 6 when Lee was reporting what he heard from Eum. “It was such an absurd and groundless lie that I thought it wasn’t even worth responding to and I feel the same now,” he said. “I just wish the truth would be revealed as soon as possible.”

Both Kim and Yoo belonged to the pro-Park faction of the Saenuri Party but are now in strained relationships with that faction and some Blue House officials who were hired after contributing to President Park’s victory in the election.

The main opposition New Politics Alliance for Democracy on Wednesday demanded that a special prosecutor investigate the leaked report and the Blue House sack the officials mentioned in the leaked report. Park said Monday there was no reason to let them go.