China emerges as a contender in group stage

China emerges as a contender in group stage 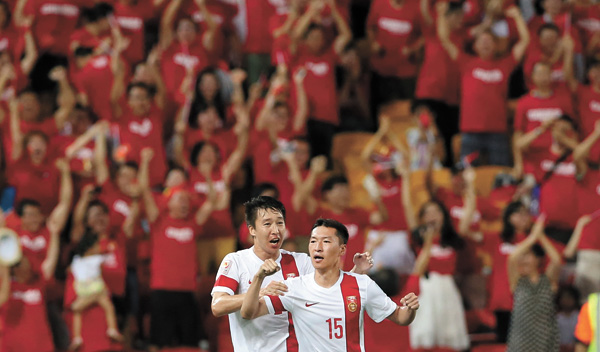 Wu Xi, right, of China celebrates a goal during his team’s Group B match against Uzbekistan in Brisbane, Australia, Wednesday. [XINHUA/NEWSIS]

South Korea will compete against Australia to be the leader in Group A of the Asian Football Confederation’s Asian Cup on Saturday, and the runner-up of that game will have to face China in the quarterfinals next Thursday.

Currently, Australia is leading Group A and Korea must win its final group match against the Socceroos on Saturday to steal the top spot.

China secured its first-place spot in Group B to make it to the quarterfinals of the tournament after beating Saudi Arabia, 1-0, on Saturday and Uzbekistan, 2-1, on Wednesday. China must still play a group match against North Korea, but the team has already been eliminated after losing its two other group games.

Before the Asian Cup started, China was considered an underdog. The country has the second-highest FIFA world ranking in Group B, at 88th after 65th-ranked Uzbekistan, but was expected to be sent home in the group stage because it has not advanced to the second round in 11 years. China made it to the final when it hosted the tournament in 2004, but Japan won the title by beating China, 3-1.

However, this year Manager Alain Perrin has lifted the team to the top of the group. The French manager, who took over the Chinese national team in January last year, is known for his ability to sharpen the skills of the teams he coaches. While he was the manager of ES Troyes AC in France, the team worked its way up from the fourth-tier league to the top-tier Ligue 1 in just six years. The Chinese national team has played 12 international matches under Perrin and posted 8-0-4.

The Frenchman has signaled that he would prefer to face South Korea in the quarterfinals rather than Australia.

“Australia was very impressive in the games, so we will see,” Perrin said after China won its second group match against Uzbekistan on Wednesday. “But I think it’s better that we don’t play against Australia.”

In international rankings, South Korea, 69th, outpaces Australia, 100th, but the Socceroos have been unbeatable at home, scoring eight goals in their two group matches. Australia must draw or win Saturday’s match to avoid China in the quarterfinals.

China has some advantages going into the next round. One is that the team played both of its group games at Brisbane Stadium, where its quarterfinal match will also be held. The field is known to be in the worst condition of all stadiums in the tournament.

Perrin described the stadium as “very, very, very, very bad,” and Korea’s manager, Uli Stielike, also expressed his concerns over the state of the turf, saying, “The condition of the stadium isn’t looking good. We should avoid playing the quarterfinal match in Brisbane.”

South Korea, which played its two previous matches in Canberra, will play its final group match in Brisbane.

A second benefit to the Chinese team is that they have tens of thousands of supporters at every game.

The runner-up in Group B will be determined after Uzbekistan and Saudi Arabia face off in Melbourne. Both teams have posted a win and a loss. Saudi Arabia is the current runner-up so Uzbekistan needs to win Sunday.