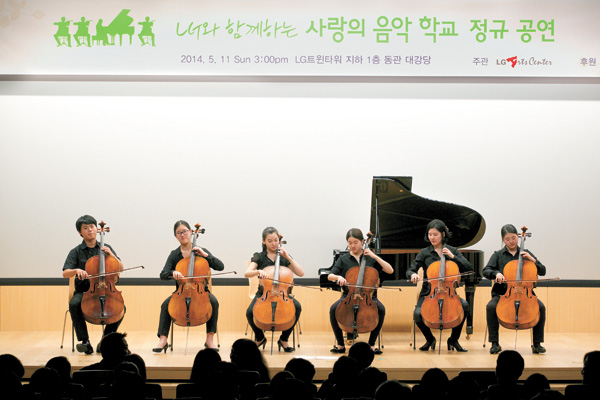 Students from the LG Chamber Music School, LG Arts Center’s training program, show off the skills they acquired from the program at the Spring Festival last May at LG Twin Tower in Yeouido, western Seoul. Provided by the center

Korea may be home to winners of numerous international classical music competitions, but experts in the industry say that chamber performances have not always had a strong following here.

In response, LG Group, Korea’s fourth-largest conglomerate, has taken upon itself to ensure that elementary, middle and high school students are comfortable with the genre.

As some of the first members of part-time program have now graduated from music colleges, the group felt it was the right time to move it to the arts center to form a closer connection between the two institutes and allow the graduates to perform in a prestigious venue.

“LG Group’s philosophy on [cultural] sponsorship is to provide a foundation where youngsters can make their dream come true,” said Paul Chung, CEO of the LG Arts Center.

Chung was a founding member of the program, which runs every Saturday.

“We wanted to show that we can train talented students with the education given in Korea, and we thought we could create a more effective synergy by having the LG Arts Center take charge of the training program.” 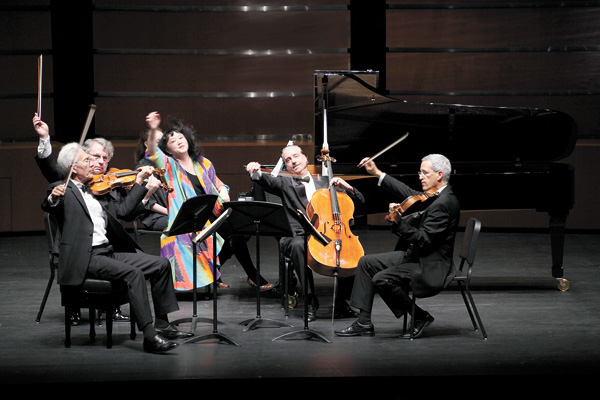 Teachers from the Chamber Music Society (CMS) of Lincoln Center in New York perform during the Spring Festival at the LG Arts Center, where its students also performed in 2011.

To provide more effective lessons, the foundation has worked with the Chamber Music Society (CMS) of Lincoln Center in New York since its launch.

CMS performers have paid visits to Korea to teach youngsters and have even put on a concert with the students from the school.

The CMS has trained globally renowned artists who have links to Korea, including Korean-American violist Richard Yongjae O’Neill. It houses 12 arts groups and holds more than 400 performances each year.

While solo performances may give players the freedom to show off their own style and a chance to shine on stage, practicing alone doesn’t help them learn how to harmonize with others.

Many professionals in the classical field have expressed how difficult it is to compromise and communicate with one another during performances, according to violinist and chief music director for LG’s program Baek Ju-young. 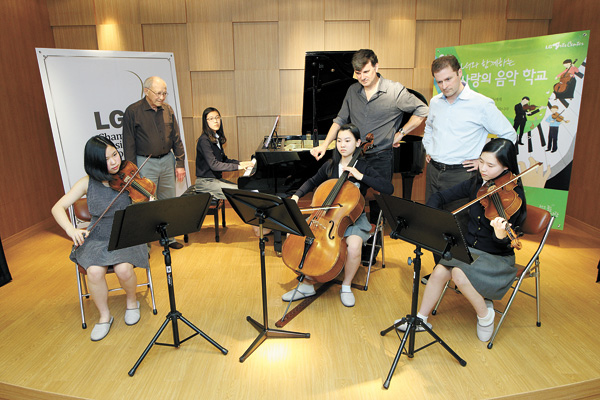 Students with the LG Chamber Music School receive a lesson from CMS instructors last May at a studio in Seocho District, southern Seoul.

“Experience in performing with many others in the early years will train performers who a lot of the time practice alone to communicate amiably without hurting anyone’s feelings,” said Baek, who is also a professor at Seoul National University. “Breathing in and out when fellow performers do and feeling the rhythm and the melody in accordance with others are key to making one sound when there is no conductor to follow.”

Although chamber music is usually performed with three or four players, sometimes there can be up to 10. Some of the most popular combinations are a violin trio, a piano trio with a pianist and two violinists, and a string quartet with one cellist, one violist and two violinists.

During the program, students sometimes clash with one another on ideas and then learn how to be patient to keep a balance when performing. They also learn how to listen to the harmony.

“When you only play your instrument, you don’t get to hear how sounds from different instruments create a new harmony,” said Kim Heo-jung, a student who will graduate from the program next month.

“It was hard to coordinate our schedules and make a harmonious sound, but once it was made, the practice was so much fun and a [seven-hour] class wasn’t long enough for us.”

The experience of playing with one another is a must, not an option, she added.

“Many people think this will take away their time to practice and is not applicable to them, but I think it is one of the most essential parts of being a better artist that should not be dismissed,” she said.


How the program works

The school selects around 15 students annually for two years of training. It chooses students who specialize in playing the piano, violin, viola and cello. Students from elementary school to high school age can apply and audition.

About 10 professors give lectures and music lessons for the program at Yewon School, one of the most prestigious arts schools in Korea, and at the LG Arts Center. During weekly classes, professors mix and match different students to create teams.

Usually, one professor continues to take charge of a group for about a year.

However, talent isn’t the only thing the conglomerate checks for during auditions. It gives preferential treatment to students from lower-income families.

“We provide help to talents who may lack monetary support from their families in order to show that opportunities can be given when students put in effort and keep working to make their dreams come true,” said Chelsea Oh, manager of the center’s communications team.

Regular lessons for this year start next month. Just like Korea’s school system, the training program has two semesters a year and takes a short break for about a month in August.

Since the class is only once a week, it starts at 9 a.m. and lasts for seven hours. Students gather not only to practice but also to learn how to read music better. After each semester, students show off their improved skills at a concert.

“Even when students want to practice chamber music, it is hard for them to coordinate a practice session, not to mention find a studio and skillful instructors who can critique the different sounds of their instruments,” said Oh Hyun-kyoung whose cellist daughter participated in the school.

“The program really took some weight off my shoulders because it offered more extensive chamber music training services, which my daughter needed before going to college.”

Besides learning how to excel at performing, the students also learn people skills, too. Since last year, a workshop has been held intermittently so that students can learn about each other as they all come from different schools and neighborhoods.

“Many students can easily be shy and introverted because they spend too much time practicing in a studio,” said Baek. “To help them build a sense of leadership and self-confidence so that they can lead a group of people to perform, we also hold a workshop on the side.”

Until last year, the prestigious CMS training school sent its instructors and performers to Korea each May to share their knowledge of how to create a great chamber orchestra. 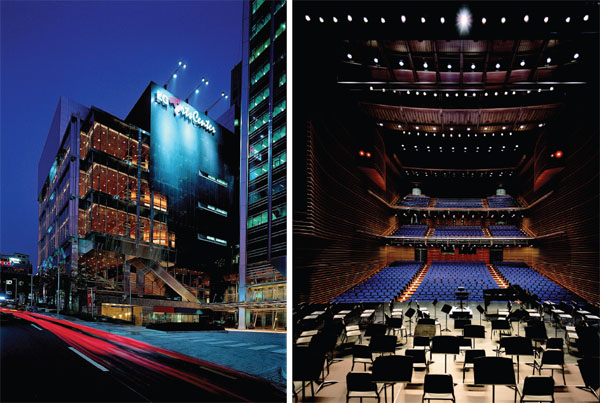 The exterior and interior of the LG Arts Center in Yeoksam, southern Seoul.

They then hold a concert with the students that they coached.

From now on, however, those visits will happen every other year, as the LG Arts Center will be taking students on a biennial trip to CMS’s home in New York.

“I’m currently working and have not been in a situation where I can provide much of a global opportunity for my child,” said Kang Sung-hee, the mother of a student who is scheduled to go to New York. “Many parents try to do more than they can afford, as many commonly say that parents’ abilities to provide monetary and informative support is the key for children to make it in the music industry, but I am not one of them.”

Her daughter, Hong Ji-soo, practiced hard and was awarded with an extra year of training in the program. She also got a much-coveted spot on the trip to New York.

Two CMS arts directors, pianist Wu Han and cellist David Finckel of the Emerson String Quarter, along with other instructors, will take time to meet with the Korean students during their nine-day trip in May.

Wu has been involved with the chamber school since its launch.

“For the past two years, Wu has sat down with us for the auditions and even played with applicants to see how a student reacts when he or she performs with others,” said CEO Chung.

Since it was established in 2000, the LG Arts Center has focused more on introducing chamber music in a country that has traditionally lacked such a culture.

This is one of the reasons the institution has taken the lead in presenting the genre in Korea as much as possible.

“Considering the resource that we have - the theater - we tried to differentiate [from other arts centers],” said Shin Ho-kyung, the center’s project manager.

“A smaller chamber orchestra was a good fit for the size of the theater, and then we continued developing more ideas to show our support for the genre. And one is managing the schooling program.”

The center invites many global performers to its stage and it has been seeking ways to have them interact with younger students.

“Because the center took over management of the training program just last year, we have not set any firm plans for this year. But we have been working to make more special training sessions available,” said Shin.

The center eventually hopes that its trainees become stars in international chamber music to prove that local music education can be efficient in helping aspiring artists gain global success.

“The best reward for us will come when locally educated students are acknowledged in the larger pool, and they make a great ensemble by being considerate of one another,” said Chung.

“The dreams of our children can eventually come true.”