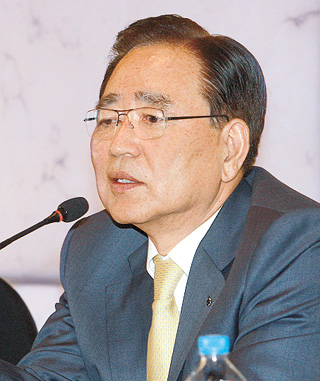 Shinhan Financial Group Chairman Han Dong-woo made it clear that although he is very much interested in the recent hype over fintech, or financial technology, he is not willing to create an Internet-exclusive bank that overlaps with existing online services.

In fact, he plans to focus more on utilizing the group’s strength as a holding company with data from banking, insurance and brokerage services to raise competitiveness of its current Internet banking service.

“In the case of a financial holding company, shouldn’t the Internet banking provide comprehensive services that combine all these financial products?” asked Han on Thursday during a press conference at the Plaza Hotel in downtown Seoul to lay out the strategies for Shinhan Financial Group in 2015.

“Simple Internet banking has no competitiveness and no meaning. If we are to start, it would be most appropriate to use the data in the financial holding company.”

He stressed that with the vast development of technology in recent years, the bank’s Internet service has made huge strides and already provides services like deposits, wire transfers and loans that Internet-exclusive banks might offer.

“The difference in competitiveness [of banks regarding fintech] will be the strategy in utilizing the information held within the financial group,” he said.

The government has been considering opening the financial sector to Internet-exclusive banks as an alternative to the four groups that dominate and control the Korean market: Shinhan, KB Kookmin, Woori and Hana.

The chairman said that to provide comprehensive products online, regulations must be eased, particularly those that are related to sharing personal information of clients.

This has been a hot potato since early last year, when sharing such information among the financial holding companies and affiliates resulted in one of the nation’s worst data breaches.

However, Han said that to provide competitive products it, information has to be shared among the units under the group.

The chairman also added that Shinhan is willingly working closely with IT companies to expand fintech services.

“We are already working with some of the companies and we will continue to work at providing better convenience,” he said.

The other issue that grabbed during the press conference was the absence of Shinhan Bank President Suh Jin-won, who has not been well.

The board of directors of Shinhan Financial Group’s flagship held an emergency meeting on Thursday to discuss Suh’s health.

The 51-year-old bank president has been absent from his job for nearly two weeks since he visited a doctor on Jan. 2. He subsequently was diagnosed as suffering from pneumonia.

“At our New Year’s ceremony on Jan. 2, he didn’t look too well,” said Han. “It seems he went to the doctor thinking it was a cold.

“The time for him to recover is taking much longer than what we had expected.”

The chairman offered no further details.

However, he did say the issue would likely be addressed during the shareholders’ meeting for the financial group and bank in March.

Suh took over as the financial group’s bank president in December 2010. His current term ends in March. Before his recent health problems, it was widely understood in the financial industry that the bank’s shareholders would approve extending Suh’s term as president for the third time.