Competition thick among producers of ramen

Competition thick among producers of ramen 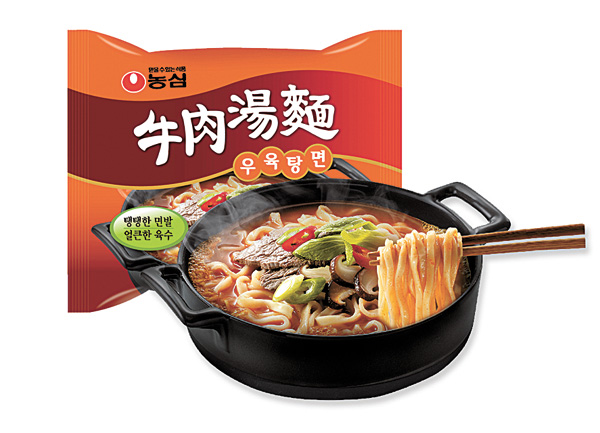 Will the marketing trend in the Korean ramen market this year shift from flavors to noodles?

Marking its 50th anniversary, Nongshim, the country’s No. 1 instant noodle maker, is poised to experiment and on Tuesday released its new Uyooktang Myeon with noodles twice as thick as typical ramen.

The chunkier noodle means it takes longer to cook. The standard recipe says the boiling time should be five minutes, about 30 seconds longer than classic ramen.

Nongshim said the launch is intended to suit the tastes of younger consumers.

“As we investigated the evolving tastes of young people,” said the company in a statement, “we found out that younger people tend to prefer thick noodles, as reflected in the popularity of Japanese-style ramen.”

Paldo, the No. 2 player, also will revamp its cup noodles. King Bowl Noodle, one of the most popular cup ramen, will get thicker noodles, the company announced Thursday.

“The noodles will be 1 millimeter thicker,” said Lim Min-wook, head of the public relations division at Paldo. “When noodles are thick they can be more chewy, and Koreans really like the chewy texture.”

Both types of noodles are based on a spicy, red-pepper broth with reduced amounts of sodium, which reflects a change in the ramen industry. Only a few years ago, white noodle products with a chicken soup base were popular.

From 2011-12, ramen with white broth gained market share as an alternative to the common spicy red soup. Varieties such as Paldo’s Kokomen and Samyang Foods’ Nagasaki Champong were among the top five products during the period.

In 2011, white soup noodles were at least 15 percent of the instant noodle market. But last year, they accounted for less than 10 percent.