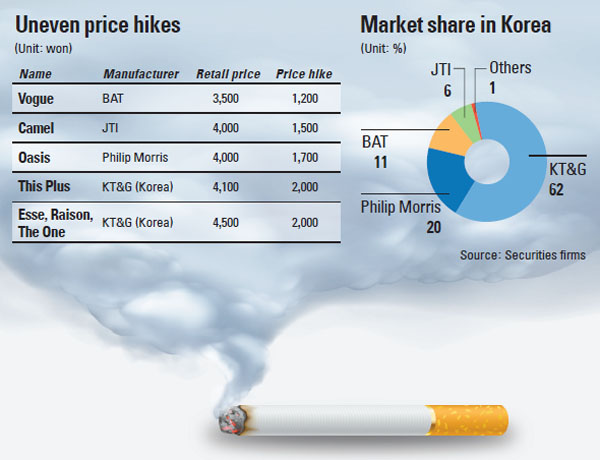 Foreign cigarettes like Vogue and Camel are using the recent price hike to expand their reach into the Korean market.

At a convenience store in Oksu-dong, central Seoul, Thursday morning, the shelves were empty of foreign cigarettes. “Foreign cigarettes that are selling for the same price as Korean cigarettes, 4,500 won [$4], are quite popular as their price hikes were smaller than that of Korean products,” said a clerk at the store.

On Jan. 1, Korean tobacco companies followed a government mandate to raise prices to an average of 4,500 won from 2,500 won. The parliament approved an increase in the tax on a pack of cigarettes last year from 1,550 won to 3,318 won.

Until Wednesday, British American Tobacco (BAT) Korea and Japan Tobacco International (JTI) had been maintaining their old prices of 2,700 won, which made them popular for an obvious reason.

But on Thursday, BAT Korea and JTI Korea finally notified the Ministry of Strategy and Finance of their price increases, and the prices of all brands - Korean and foreign cigarettes - were higher, a major part of the government’s efforts to wean Koreans off the smoking habit.

However, some products of BAT Korea and JTI Korea are now cheaper than Korean cigarettes, with JTI’s Camels selling for 4,000 won and its new product Mevius E-style for 4,300 won.

BAT Korea’s slim cigarette Vogue is the cheapest on the market at 3,500 won per pack. The price of its premium product Dunhill is now 4,500 won, even with the average Korean brand.

BAT initially intended to raise the price of Dunhills 2,000 won from 2,700 won to 4,700 won, but later settled on 4,500 won to ignite some price competition with local cigarette makers.

“We aim to increase sales by minimizing the price hike, although the tax increased more than 2,000 won,” said a spokesman for BAT Korea.

Given that tobacco companies now have to pay 3,318 won in taxes per cigarette pack, the 3,500 won Vogue cigarettes will sell at a loss, analysts said, after the company pays for other expenses such as the cost of production.

Analysts said foreign cigarette makers are using the price hike to expand their market share in Korea instead of aiming for high profitability.

Price matters among Korea’s smokers. In 2011, BAT, the second-largest cigarette seller in Korea, was overtaken by Philip Morris after raising the price of its cigarettes from 2,500 won to 2,700 won.

Korea’s cigarette market is now dominated by the No. 1 player KT&G, a former government monopoly, followed by Philip Morris, BAT and JTI.

This year, BAT is shaking up the market with unprecedented prices to recover its market share.

“In Korea, super slim cigarettes are gaining popularity. We decided to adjust the price of the Vogue series to 3,500 won so that smokers enjoy them at cheaper prices,” said Guy Meldrum, CEO of BAT Korea.

There is speculation that BAT will raises the price later.

“We don’t know how long BAT will be able to sell the Vogue series for 3,500 won,” said a spokesman for KT&G. “As sales of cigarettes are dropping significantly at convenience stores, it is difficult to make any adjustments in the prices for now.”

Philip Morris Korea said it will cut prices of Marlboros and Parliaments from 4,700 won to 4,500 won starting next Monday following BAT’s move with its Dunhills.

Industry sources predict KT&G might lose out if BAT, JTI and Philip Morris engage in a price war.