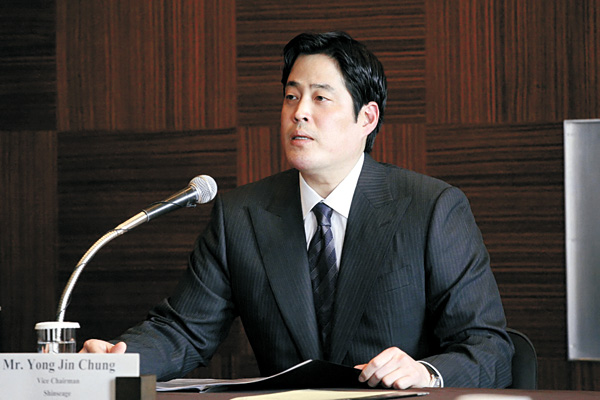 Shinsegae L&B, the liquor and beverage distribution arm of Shinsegae Group, has primarily focused on distributing popular brands of imported beer and wine to retailers but is seeking to reach out to booze enthusiasts with its own high-end liquor store chain.

The liquor store, called Wine & More, will be introduced at its affiliated shopping malls and department stores nationwide.

The first Wine & More will open at the Shinsegae Premium Outlet in Paju, Gyeonggi, on Feb. 12. The company said that the 132-square-meter (157.9 square yard) shop will sell quality wine and liquor brands that are difficult to find at other major retailers.

“The store is designed to cover a wide range of beverages and liquors in one place,” a Shinsegae L&B official said, requesting anonymity. “When you go to a discount chain or department store, alcohol products are scattered away in different sections.”

The store will also sell 100 types of alcoholic beverages from around the world, according to Shinsegae L&B.

The official said that the selection of alcohol at the new store will be different from the collection that is distributed at E-Mart, the country’s largest discount supermarket chain and an affiliate of Shinsegae Group.

The second branch of the store will open at Yeoju, Gyeonggi, in March when renovation has finished at that outlet.

The launch of the liquor store is intended to help Shinsegae Group better compete with its rival, Lotte. The Lotte Outlet in Paju has its own premium wine and spirit shop operated by liquor distributor Keumyang International in addition to another branch at a Lotte Outlet in Busan.

Industry insiders say the new store is an attempt by Shinsegae L&B to diversify its distribution channel, which is now limited to Shinsegae subsidiaries like E-Mart.

Chung Yong-jin, vice chairman of Shinsegae Group, has become passionate about the liquor business, as reflected in other recent moves by the retail group.

“We collected all traditional liquor there and sales of the products doubled compared to the period before we made the designated section,” said Hong Seong-min of Shinsegae Department Store.

The Woori Sulbang and Wine & More stores target a sophisticated consumer base, but high-end consumer are not the only goal.

Shinsegae Food confirmed last year in a regulatory filing that it will being mass producing its own brews.

Its liquor business will likely further expand given that the vice chairman is an avid wine lover and occasionally posts wine-related tweets online.