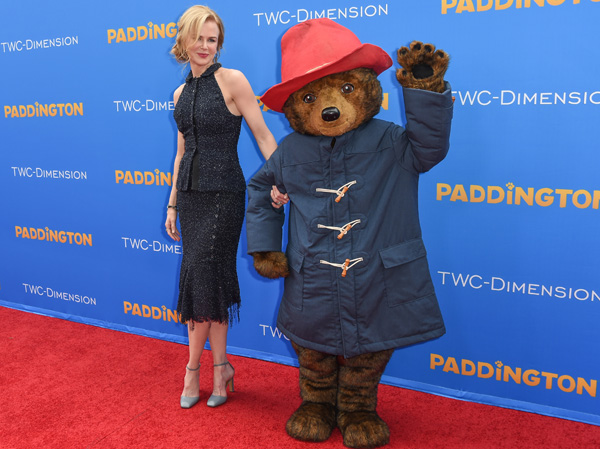 Nicole Kidman and Paddington Bear arrive at the Los Angeles premiere of “Paddington” at the TCL Chinese Theatre in Los Angeles on Jan. 10. [AP/NEWSIS]

In her 31-year career, her roles have ranged from the morose to the deliciously sadistic. There are a few straight comedies in her resume, but Kidman is the first to admit that she just doesn’t get many offers to do that type of work.

She’s won an Oscar. She’s worked with Stanley Kubrick, Jane Campion and Lars von Trier. So how did she end up in a modest role as a delightfully villainous taxidermist in the children’s film “Paddington” with a relatively unknown director at the helm?

The answer is simple: She was asked.

“The desire to run the gamut and be diverse is something you’re taught at drama school,” said Kidman on a recent afternoon at the Beverly Wilshire Hotel. “We’re trained in Shakespeare and then we’re trained in Noel Coward and we’re trained in mime classes. But a lot of times you’re not given the opportunity to explore the things that you’ve cultivated.”

For director Paul King, it was a no-brainer. But it wasn’t Kidman’s 1996 romantic fantasy romp “Practical Magic” that he was thinking of. He’d seen Gus Van Sant’s “To Die For” and knew Kidman had to be his Millicent.

In the film, out Friday, Millicent is a leather-clad, stiletto-wearing femme fatale who will stop at nothing to stuff the iconic talking bear from Darkest Peru and put him in a museum.

“He wrote it for me. I’m not sure if that’s a flattering thing or not,” Kidman laughed.

King, who had mostly worked in British television, knew it was a long shot.

“You should never write for an actor because they’ll just say no. But I did have her in mind,” he said.

The hard part was convincing everyone to actually put the script in front of Kidman. As King describes it, it’s a process of being politely insistent.

Despite all the warnings that Kidman was “never” going to say yes, as soon as she heard the name “Paddington,” she jumped. Kidman had grown up reading Michael Bond’s books in Australia and it just struck a nerve.

Ultimately, King said, she was the easiest person to cast. She signed on in just 12 hours.

“You don’t often see the silly side of Nicole and she’s such a funny, easygoing person,” said King, who really put the actress to the test. On day one, she was hanging upside down on wires and it just got more challenging from there.

“I hope it gets a good response. It’s smart,” said Kidman of the movie, excitedly talking about how the physical comedy of the CG bear makes her two young daughters “squeal with laughter.”

Taken alongside a recent segment on “The Tonight Show Starring Jimmy Fallon,” where Kidman charmingly revealed that the host had missed an opportunity to date her years ago (the YouTube video has over 19 million views to date), it might seem as though the actress who once urinated on Zac Efron for a role, is in a new phase of her career.

The past year was not exactly a stellar one for the Oscar winner either, with middling limited releases like the thriller “Before I Go To Sleep” and the historical drama “The Railway Man,” and the mysterious non-release of “Grace of Monaco” in the United States.

“It’s sad,” said Kidman of the Grace Kelly drama. “I put so much work into it. I would have loved for it to have been embraced.”

But Kidman insists that she’s “not the actor who makes strategic choices. If you look at my career, it’s pretty random.” Even the Fallon bit was “so not planned.”

Still, she is taking the reins where she can. Kidman and Reese Witherspoon optioned the rights to the book “Big Little Lies,” which is in development as a limited series. She’s also staring in and producing the adaptation of the quirky novel “The Family Fang.”