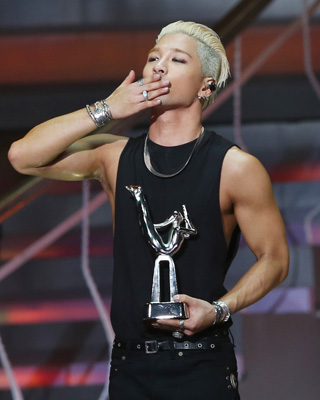 BEIJING - The curtain for the much-anticipated Golden Disc Awards finally raised Wednesday evening, lighting up China’s capital with glamor, music and energy from some of the most popular K-pop stars.

The biggest winner was Taeyang, who received the digital album award - the top prize of 10 awards given to artists who released albums last year - for his single “Eyes, Nose, Lips” from the album “Rise.”

“I received so much love last year and am grateful that it continued until this year. I will try to show my best in the future as well,” said Taeyang during his acceptance speech.

Hosted by Ilgan Sports, a Korea JoongAng Daily affiliate, the Golden Disc Awards are in their 29th year, marking the longest run for a Korean music awards show. The two-day event is taking place at the MasterCard Center in the heart of Beijing, the ceremony’s third overseas destination following Japan in 2012 and Malaysia in 2013.

Despite the freezing, smoggy weather in the city, some 30 K-pop acts, including Beast, Winner, Sistar and Hyun-a, flaunted their best looks on the red carpet and brought some of their representative tracks to the stage.

Thousands of fans from home and abroad flocked to the venue to celebrate and honor the most recent achievements of their favorite artists.

Eight-member girl group AOA opened the ceremony with their viral song “Like A Cat” in military-inspired costumes.

They were followed by Ailee’s powerful solo performance, which kept the mood inside the concert hall pumping.

But due to administrative errors, the group was denied approval from Chinese immigration to perform at the event as the members entered the country on tourists visas.

The organizers apologized for the mistake afterward.

Along with Beast and Taeyang, eight other K-pop groups went home with the main digital album award, which is based on online downloads. Leading girl groups Sistar, A Pink, Girl’s Day and Ailee were among the award’s recipients.

Soyou and Junggigo also won for the immense popularity they earned last year for their collaboration “Some.”

Junggigo, once an underground hip-hop musician who rose to stardom through this song, shed tears on stage over his first-ever nomination and win at the Golden Disk Awards.

“We debuted in 2014 and we are so grateful that we again received so much love in 2015 already. It makes me to think that I want to be a bigger singer,” said Winner member Kang Seung-yun during a brief interview after the group received the prize.

“Seung-hoon is not here with us today because he is sick and receiving treatment at a hospital. We wish him a quick recovery and will come back as a five-member band soon,” he added.

Rising male duo Tasty, which is comprised of twin brothers Dae-ryong and So-ryong, was able to snatch the next generation award for the potential seen by their growing popularity in China over the past few months.

Considering the large demand for K-pop in the nation, the two-hour event was broadcast live on Chinese video website www.iqiyi.com.

Fei, the Chinese member of girl group Miss A, presented the show in fluent Korean and Chinese along with singer Kim Jong-kook and anchor Kim Sung-joo.

On Thursday evening, the highest honor of the event, the grand prize, will be announced.