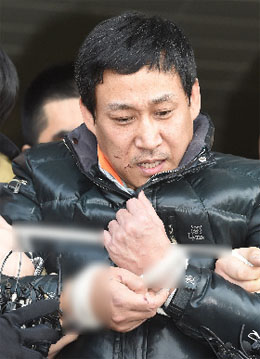 A man who is suspected of killing his 17-year-old stepdaughter and her biological father after holding them hostage for at least five hours on Tuesday steps out of Suwon District Court on Thursday following questioning. The police said they had decided to reveal the suspect’s face to persuade the public to practice caution. The suspect admitted to his crime, authorities said, but blamed it on his wife. [NEWSIS]