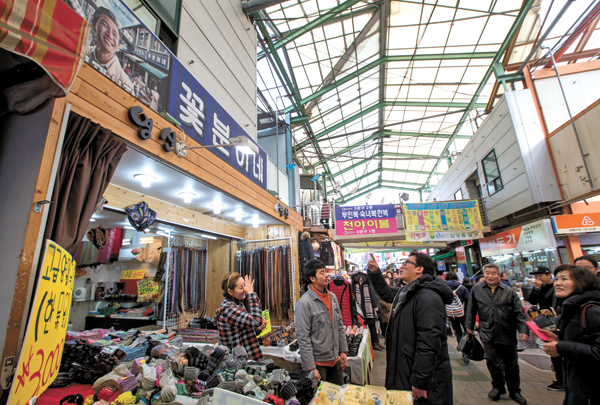 Riding on the popularity of the film “Ode to My Father,” Gukje Market in Busan is regaining its old glory. Director Yoon Je-kyun,

Riding on the explosive popularity of local film “Ode to My Father,” Gukje Market in Busan - the movie’s main setting - is frequented by more visitors than ever these days.

“We see up to six times more visitors during the weekends and three times more during weekdays,” said Kim Yong-wun, 67, head of a merchant association working for the market.

In the film set in Korea’s modernization era, the city’s largest traditional market is depicted as a place for lead character Deok-soo to settle down after he goes through several ups and downs. He begins to make a living to support his whole family by selling miscellaneous imported goods.

The market first formed 70 years ago when the country was liberated from Japanese colonial rule. It prospered after the 1950-53 Korean War, transforming itself as a place for refugees from the North to trade goods.

People who were displaced by the war could bring home rice and meat by selling Hershey’s chocolate or canned food, which were rare treats back in the 1960s and 1970s.

During its heyday, pricey imported goods such as leather and fur were traded at the market, but it began to lose footing after the opening of posh department stores and discount shops.

Thanks to the hit box-office movie directed by Busan native Yoon Je-kyun, however, Gukje Market is regaining its old glory.

The filmmaker recently took the JoongAng Ilbo on a daylong tour of the port city to see where he shot the movie and to introduce us to the best sites.

On the morning of Dec. 29, Yoon was seated in the corner of Wonjojib, an old restaurant located inside Jagalchi Market, the biggest fish market in Korea. 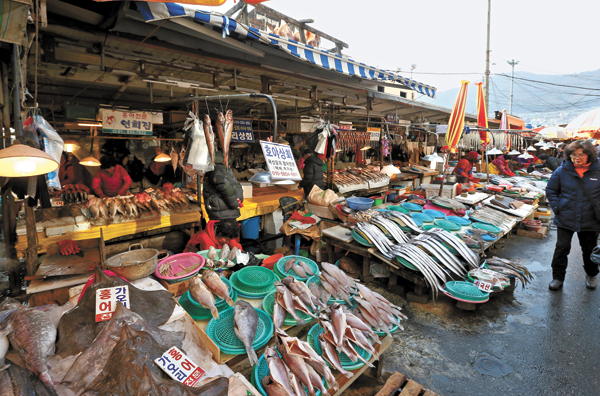 The market opened after the Korean War broke out. Women needed to support their families and began to sell buckets of fish caught in Busan’s sea.

There are many old seafood restaurants inside the fish market.

The eatery, which first opened 56 years ago, sells sea eel marinated in spicy red sauce that is later grilled on a briquette fire.

“I’ve been thinking for so long that I’m the best person to take people on a tour of Busan,” said Yoon with his heavy Gyeongsang accent.

“Have a bite,” he said, as he put pieces of grilled sea eel into his mouth.

As is the case with other fish markets, people are able to buy seafood here and eat it at a nearby restaurant that charges a certain amount of money for seating and condiments. Basic sauces such as wasabi, soy sauce, and sweet and spicy red pepper paste are provided, along with lettuce and sliced garlic.

The charge varies depending on the facility, but it usually starts from 4,000 won ($3) per person.

People are able to order bowls of rice, alcohol or spicy fish stew, too.

After looking around Jagalchi Market, which is one of the locations for Yoon’s film, we moved to Yeongdo Bridge, which was constructed in 1934.

It was the country’s first drawbridge to connect the mainland with an island. The bridge stopped operating in 1966 but it began moving again in November 2013.

The bridge is pulled up once a day at noon sharp. With the sound of an ear-splitting siren, traffic is controlled for 15 minutes and the bridge begins moving upward for ferries to pass underneath.

Yoon, who knows every nook and cranny of Busan, said it was the first time he saw the huge bridge being lifted.

Since bascule bridges are hard to find anywhere in Korea, a throng of people gather to get a glimpse of Yeongdo Bridge being raised.

In the original screenplay for “Ode to My Father,” which was written by Yoon, there is a scene that includes the bridge.

But the director could not shoot the part because his film was already over its planned running time.

After watching the bridge give way to passenger ships, Yoon pointed at a fortune-telling house located underneath.

“When the nation was divided after the Korean War, Yeongdo Bridge became a meeting place for people with estranged family members,” said Yoon. “People with family up in the North dropped by the fortune-telling house and asked if their families were dead or alive.”

The next destination after Yeongdo Bridge was Gukje Market.

For Yoon, the market has made Busan a place that is more welcoming to outsiders compared to other parts of Korea.

“I think Busan is more open to people from other parts of Korea,” he said. “Maybe because people who formed the market in the first place were from all parts of the nation. They were refugees or people who just arrived from Japan after the country’s liberation.”

As Yoon strolled around the market, he recalled his childhood days.

“I came here quite often when I was young with my mother. I still have vivid memories about the crayons and sketchbooks I bought from the market,” he said.

“With those U.S. products, I was considered a star at school.”

But 70 years later, Gukje Market had lost its vigor. There are more than 1,500 stores, but most sell inexpensive items such as pet food, imported snacks and cheaply made shoes.

“This market is just like our own fathers,” said Yoon.

“It was once shining, but it is now old just like our fathers in their 60s and 70s. This market is not alive and kicking as it used to be, but it is still warm and homely.”

The main targets of the market are people in the age group Yoon mentioned, but the market sees more younger people in their 20s and 30s after “Ode to My Father” became a huge hit. 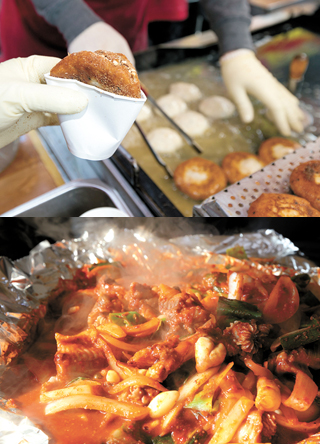 Top:Hotteok filled with nuts is a local delicacy in Busan. Hotteok is a traditional Korean sweet treat. Above:Sea eel marinated in spicy red sauce at Wonjojib in Jagalchi Market.

The popularity of the movie was obvious on the day we visited the market. A swarm of people surrounded Yeongshin Sanghoe and took selfies with the store as the backdrop.

The shop was used as the film’s main location. Deok-soo ran a small business there under the name Kkotbunyine, selling various imported goods.

In order to live up to the expectations of people who visit the store after watching the film, Yeongshin Sanghoe temporarily changed its signboard from Yeongshin Sanghoe to Kkotbunyine, which roughly translates to “Kkotbun’s store.”

Unlike the fictional shop that sells imported snacks and food, the real version retails fashion accessories such as wristwatches, socks and belts.

“I saw a 30 percent sales increase thanks to your film,” Shin Mi-ran, the owner of the store, told Yoon.

Some of the available treats can only be found in the port city. They include skewered rice cakes soaked in fish cake soup, as well as more typical fish cakes.

Bibim dangmyeon is another local delicacy. It is similar to bibim guksu, or thin wheat noodles served with sweet and spicy sauce, but Busan’s version uses glass noodles instead of its thin wheat counterpart.

To try out more street food at night, head to Bupyeong Kkangtong Market, which is about a four-minute walk from Gukje.

Officials running the night market give priority to ethnic minorities living in Korea when receiving applications for stalls. These overseas sellers serving food or vending goods are modern versions of Deok-soo.

Just like the diversity of their offerings, the salespeople all have different stories to tell. A Chinese woman who sells pan-fried cold noodles from Harbin wants to visit her family some day.

Another woman from Vietnam hopes to earn money for her family inside and outside the country by selling rice noodles. In order to boost sales she said she modified her recipes to suit the palates of Koreans.

An accessories stall is run by a Kenyan who is visiting Korea for his studies.

“I think this works like a cultural exchange between two countries because Koreans buy things from my store and wear them,” the man said.

Gukje Market is 20 minutes away from Busan Station by car.

Yongdusan Park, which is a 10-minute walk away from the market, is also recommended because people can see the whole of downtown Busan from the top.

Nampo-dong, just a block away from Gukje Market, was once the local area’s center of film until a few years ago when the Busan International Film Festival moved to Haeundae and Centum City, the most affluent areas of Busan.

Still, Nampo-dong is crowded with people who want to catch the latest flicks because the neighborhood has a much larger number of movie theaters than other parts of Busan.

Handprints of many famous directors and actors can be seen on the street, as well as some signs showing that Nampo-dong was once a hub for film. 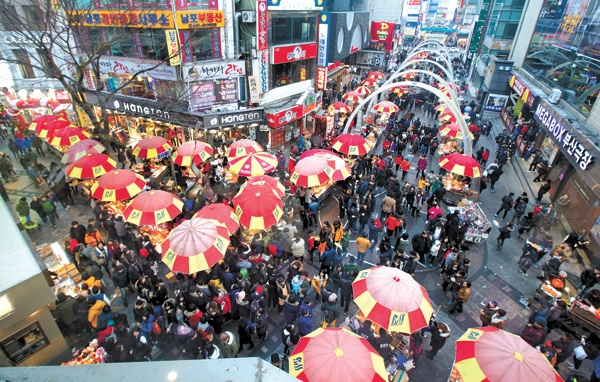 Many old restaurants are located here. One is Wonsan Myeonok, a cold noodle spot.

Hotteok, or Korean pancake stuffed with sugar and nuts, is another specialty of Nampo-dong.

Without a doubt, the area is Yoon’s favorite hangout.

“One day, I came here to watch a film when I was a college student and happened to see actress Kang Soo-yeon,” he said. “I screamed with joy. Time flies.”

In “Ode to My Father,” Deok-soo does all that he can do to support his family. He leaves for Germany to become a miner in order to send home money and he also joins the Vietnam War as a technical laborer.

Later in life he finally settles down in Chojang-dong, a typical shantytown in Busan.

The neighborhood was formed by refugees during the Korean War.

We decided to walk through the neighborhood.

It took a while to reach the top of the hillside, but minutes of walking rewarded us with a panoramic view of Busan.

Every major spot, from Yeongdo Bridge to Nampo-dong to Jagalchi Market, came into sight.

Yoon gazed at the view of Busan for a while without saying a word.

If you want to visit Deok-soo’s house in Chojang-dong, head to Chojang Middle School, which is right next to it.

The path to the neighborhood is quite hilly, but buses No. 134 and 190 take people from the entrance of the town to the middle school.