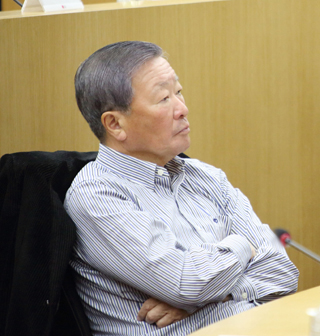 It has been 20 years since Koo was inaugurated as LG Group chairman and the group was renamed LG from Lucky Geumseong in 1995.

In February 1995, Koo said he would grow LG into a leading global company by taking up new challenges in areas that others deemed impossible.

Just as he said, in the past 20 years LG Group has made remarkable breakthroughs and developed rapidly since Koo succeeded his father, Koo Ja-kyoung, currently honorary chairman of LG.

Its market capitalization has jumped to 67 trillion won last year from 7 trillion won in 1994, even after its affiliates separated from LG as GS Group, LS Group, LIG Group and LF Group.

In addition, in the electronics, chemistry and communications sector, LG affiliates have become some of the world’s best companies.

With the G Series, LG Electronics is the No. 3 smartphone maker in the world and was the first to commercialize OLED TV.

Most of all, Koo emphasized “taking action.”

“Our business environment is changing abruptly and in order for us to lead the change, we need to speed up putting plans into action,” he said. “The discussions that we have should not just remain as slogans, but must be put into effect in order for LG to become the world’s No. 1 conglomerate.”

Koo reiterated that all the plans intended to speed up the companies’ performances should immediately be put into action.

“In order to speed up the performances, I hope the chief executives will take action and make changes first to encourage our employees to do the same,” said Koo at the conference. “LG has overcome several risks and crises and come closer to leading the market. I urge all the CEOs to do their very best so that LG will consistently grow as the No. 1 and become a symbol of innovation for the better lives of customers.”

Koo already emphasized the importance of taking action in his New Year’s message, saying, “If LG could take new business opportunities with thorough preparations for the future and lead the market with LG’s own differentiated ways, LG will not be buffeted by rough waves. With stern determination to lead the market, we must find ways and take action.”

He also sought opportunities for future growth under the environment of global industries and ways to improve putting business plans into action. The executives also discussed current and future market trends, the effects of the recovery of the U.S. economy and shale gas production.

In addition, the chairman and executives agreed the materials industry is leading the trend of wearables, renewable energy and smart manufacturing technologies, agreeing that innovation and diversity are required to secure competitiveness.

LG is focusing on fostering solutions and parts development business for next-generation smart and electric cars based on world leader LG Chem’s competitiveness in batteries.