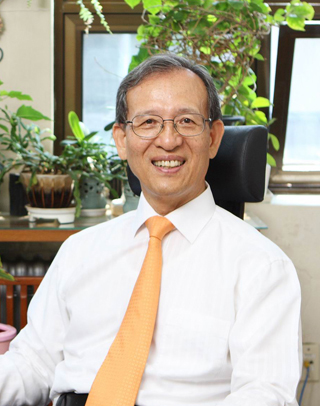 Some 30 years ago, Prof. Lee Joon-koo’s students at Seoul National University often called him the “F-bomb” or the “CD player,” referring to the grades he handed out.

His pupils rarely received As or Bs.

But over the years, things have changed. Now, the 65-year-old is known as “ABBA,” a play on the fact that he has become more generous with his marks over the decades.

“As time goes by, I became sort of easy in grading my students, and I think that implies that I became more compromised with the world,” he said.

As a professor of microeconomics, Lee has been active in voicing his economic opinions on social issues.

He has criticized the four-rivers restoration project - the Lee Myung-bak government’s signature project to refurbish the Nakdong, Geunm, Yeongsan and Han rivers that has since became the subject of controversy and political scrutiny - as well as tax reductions for the wealthy.

Lee has long been known as an economist who has dared to say exactly what he means. But now, after teaching for 31 years at SNU, Lee is looking to retire next month.

He’s been evaluated as a good researcher and a great professor, and has even earned himself a student fan club. And with his coming retirement, his students have also dedicated a book to him to commemorate his achievements.

The publication “Student Over Flowers,” named after the popular television series, features Lee’s current and former pupils, including Oak Dong-suk, the president of the Korea Institute of Public Finance.

In their minds, he has always been a strict professor, but most importantly, one with a warm heart.

Kim Young-chul, a professor in the department of economics and finance at Sangmyung University, and Ryu Doo-jin, an economics professor at Sungkyunkwan University, credit Lee with changing the direction of their lives.

Both were engineering students until they enrolled in his economics class, a decision that ultimately led them to reconsider their majors.

Lee’s office has always stayed open, and more than 10,000 students have made posts on his website. The website has also provided the professor an easy way to communicate with his classes.

“In the early years teaching at the university, I felt sad seeing students arrested while fighting for democracy,” Lee said. “But now, I feel pity for students who are job hunting and struggling to pin down a career.”

His advice? Have “guts,” believe in yourself and follow your dreams.

Lee plans to continue teaching at SNU as an honorary professor for five years post-retirement. “If I teach 100 students in class for an hour, it’s equivalent to 100 hours of learning, which cannot be converted into money,” he said.