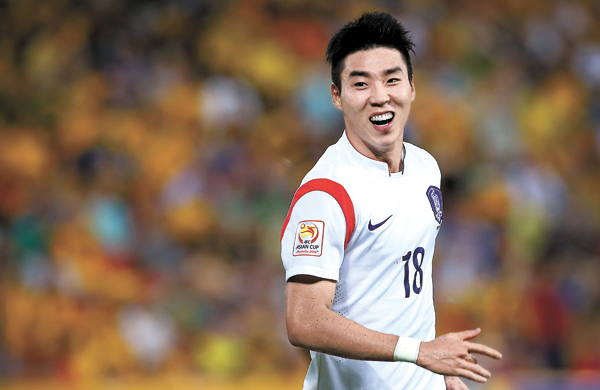 The Korean national football team took the top spot in Group A in the Asian Football Confederation’s Asian Cup by beating all three contenders, including the favorite Australia, and headed to Melbourne on Sunday for their quarterfinal match against Uzbekistan.

In their final group game on Saturday at the Suncorp Stadium in Brisbane, South Korea pushed Australia down to second with Lee Jung-hyup’s goal in the 32nd. Australia, which has scored the most goals of any team in the Asian Cup so far, failed to equalize despite several critical chances.

With the third match over, Manager Uli Stielike does not have to worry about the condition of the Suncorp Stadium any more. The field, which was used for several group matches, is known as the worst in the competition and will be the location of the quarterfinal game between Group A runner-up Australia and Group B leader China.

Also, since China has emerged as a surprising contender in the tournament, beating all three other countries in Group B, South Korea will now have the chance to analyze their playing style instead of facing them right away. China has posted 7-0-4 in the 11 international matches it has played since September.

Though the Taegeuk Warriors will have a four-day break before facing Uzbekistan in the quarterfinal on Thursday, Stielike will not have all 23 players to pick from in his first international competition with Korea.

Two key players, Koo Ja-cheol and Lee Chung-yong, are out for the rest of the tournament due to injuries.

The Korea Football Association (KFA) announced Sunday that Koo, who was named man of the match in the first game against Oman, had injured a ligament in his elbow and he was told not to play in the remainder or the Asian Cup matches.

The former team captain fell after colliding with Australian defender Matthew Spiranovic midair while fighting for the ball in the 49th minute and was replaced by Son Heung-min.

Midfielder Lee was also injured in that match after he was slide-tackled twice. He signaled that he could not run any more and was replaced in the second half. He was found to have a hairline fracture in his right tibia, bringing reminders of August 2011 when he broke his right leg and took nearly a year to recover.

Stielike is expected to send in Han Kyo-won instead of Lee and Nam Tae-hee for Koo, but the two are less experienced than the injured players.

In the final Group B match on Sunday, which would determine which team moved on to the quarterfinals along with China, Uzbekistan beat Saudi Arabia 3-1 after Sardor Rashidov’s goal at the very beginning of the game and Vokhid Shodiev’s header in the 71st.

When Rashidov tried to break through the defense in the second minute, the ball was deflected by the Saudi defense back to the 23-year-old Uzbek forward, and he netted it with his left foot. Uzbekistan added two more goals as Vokhid Shodiev headed in a free kick and Rashidov added another in the 79th in a one-on-one chance.

Saudi forward Naif Hazazi was given a penalty kick in the 58th after a bad tackle by Vitaliy Denisov and Mohammad Al-Sahlawi kicked it in, equalizing the match. But the Middle Eastern team could not make it through to the quarterfinals.