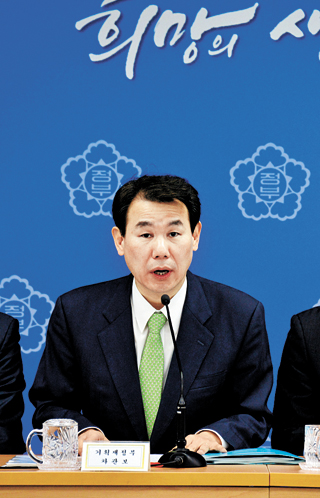 Jeong Eun-bo, the deputy finance minister, speaks during a briefing session on Sunday at the Sejong Government Complex. [NEWSIS]

The government announced a plan over the weekend that would help move business investments forward and improve the country’s tourist infrastructure, part of efforts to revitalize the national economy.

The Ministry of Strategy and Finance said Sunday that it would work to create an environment to help companies advance their planned investment to boost competition and encourage growth.

Those plans, it said, would in part help Korean businesses pinpoint better opportunities to develop new growth engines, adding that the measures will focus on areas that have large investment demands, including startups, the tourism and service sectors, information technology (IT) and biotechnology.

“We expect about 25 trillion won [$23 billion] worth of investments to be made in the next few years,” the ministry said in a statement. “What we are trying to do is to help companies succeed in their planned investments by providing proper support - easing regulations, preparing infrastructure and financing.”

Of that 25 trillion won, about 16.8 trillion won worth of investment is expected to be realized earlier than initially scheduled. The government said some regulations that have long been barriers for companies to launch new businesses will be revised or removed.

Large-scale industrial development projects, it added, are expected to be affected by the initiative - notably, a project that would see the development of the U.S. Army Garrison in Yongsan District, central Seoul, as well as a plan by Hyundai Motor, the nation’s leading automaker, to build its Global Business Center in Samseong-dong, central Seoul.

Plans to develop the land as a commercial area first materialized after it was announced that most U.S. military facilities would be consolidated to Pyeongtaek, Gyeonggi, by 2016.

However, because the Ministry of National Defense and the Seoul Metropolitan Government had differing opinions on development plans, the overall process was delayed.

The government said it will urge the military and city government to decide how they will develop the area by the first half of the year in order to attract investors in the second half. The government added that about 5 trillion won worth of investments are expected to be made in the area.

It is also anticipating large-scale investments by Hyundai Motor.

Last year, Hyundai Motor Group said it planned to build its new business hub, which would include its own new 105-story headquarters, on the Samseong-dong land, which the conglomerate purchased from the state-run Korea Electric Power Corporation in September for 10.5 trillion won.

The government said it would help the auto giant start the project as soon as possible by easing regulations to allow Hyundai to start construction by 2016.

“We agreed to ease regulations on the land with the Seoul Metropolitan Government, so Hyundai Motor can start construction works earlier,” said a spokesman from the Finance Ministry. “If the company submits a complete development plan for the land in March, all related measures will be implemented.”

The government concluded that a series of assessments to determine how the project would influence the region’s traffic and environment would take too long to complete - nearly eight years - which would likely damage its investment potential.

It said it decided to “fast track” the process due to the venture’s location in the affluent part of southern Seoul and its projected worth.