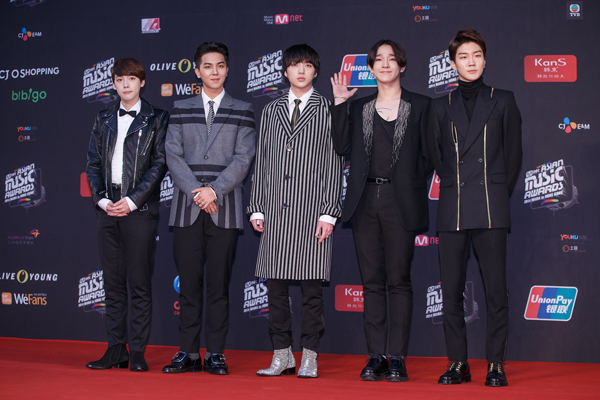 Fans of K-pop boy band Winner will not likely see Lee Seung-hoon, (far right in photo) one of the members, anytime soon.

According to YG Entertainment, the agency of the five-member K-pop act, Lee is sick and he could not participate in the Worldwide Inner Circle Conference 2015, which is a fan meet event in China.

The first WWIC 2015 was held in Beijing on Jan. 10 and the second on Jan. 17 in Shanghai, and Lee did not attend either.

The next WWIC 2015 meet up is scheduled for Jan. 24 in Shenzhen and the boy band will hold a fan meet on Jan. 31 at Seoul Olympic Park, southeastern Seoul, but it isn’t clear whether Lee will attend.

He also was not present when Winner was named the best new singer of the year at the 2015 Golden Disc Awards in Beijing last week.

“Lee will join the band once he gets well,” YG said.

Winner broke into the music scene last year and has already amassed a big fan base across Asia.