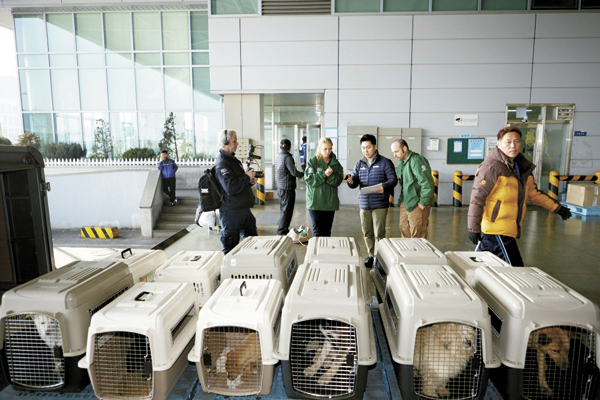 Twenty-three dogs that were once raised for their meat at a dog farm located in Ilsan, Gyeonggi, wait to be transported to Washington D.C. on Jan. 6. [AP/NEWSIS]

Dogs of various sizes and ages locked inside rusty cages wagged their tails as a group of people approached them at a small farm in Ilsan, a satellite city northwest of Seoul, earlier this month.

The canines, which had been reared for their meat in poor conditions, had never been let out of captivity.

But their fate was about to change. The 23 dogs were to be transported to Alexandria, Virginia, by U.S.-based animal rights association Humane Society International (HSI).

Their arrival in the United States on Jan. 5 made international news, with headlines such as “The puppies saved from the dinner table” and “Korean ‘meat farm’ dogs get second chance as pets.”

The animals have been sent to six shelters within the Virginia area and are waiting to be adopted, according to the animal rights organization.

Through several interviews with U.S. media, Kelly O’Meara, the director of companion animals international and engagement at HSI, addressed the issue of dog meat consumption in Korea.

“We’re trying to raise awareness both in Korea and internationally of the cruelty that exists behind this trade,” O’Meara said on a video published online by National Geographic on Jan. 6.

“These 23 dogs are acting as ambassadors for a campaign we’ve now launched in Korea to try and reduce the overall dog meat consumption in the country.”

She also told news organization AFP that the farmer said he would now grow blueberries instead of dogs.

The HSI compensated the farmer with $2,500, the animal rights group said.

But according to Jang Byeong-kwon, who makes his living by sending dogs for adoption overseas, the society’s story is not as simple as it seems. 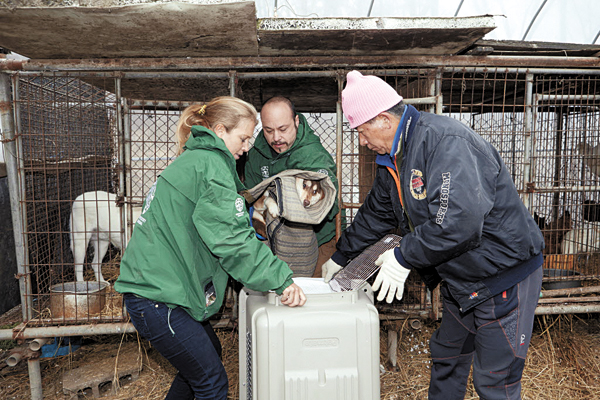 Lola Webber, left, a consultant for Humane Society International, removes dogs from cages along with the dog farm’s owner.

The owner of the dog farm in Ilsan was already in the blueberry business and was raising the dogs on the side, Jang told CBS Park Jae-hong’s News Show, a local radio program, raising questions over the group’s narrative regarding the saved canines.

The former Korean animal rights worker also suggested that the group’s intention was to use the rescue to amass funding.

“As far as I know, they can get a large amount of donations from anywhere in the [United States] if they bring these dogs over to their country,” he said during an interview with the program.

“Even stray dogs are labeled as farm dogs when they go overseas and are used to attract publicity for donations.”

Jang told the Korea JoongAng Daily that he spoke out about the society because he feels it is a “problematic association.”

“If overseas associations earn money through donations, they should invest in rescuing other [Korean] dogs, but they don’t and I was angry about that,” he said.

He claimed that an unspecified animal rights association stole three dogs from a meat farm three years ago and took them to the United States for adoption.

“But the mixed breeds were way too big and they couldn’t find new homes in the United States,” Jang said. “They were all killed after being used for donations.”

Some farms rear certain mixed breeds that tend to have more meat. These dogs can weigh up to 50 kilograms (110 pounds).

“So I stopped [HSI] from taking large breeds to its country because they have small chances of finding homes overseas,” Jang continued.

According to Jang, Korean dogs, whether they are abandoned or come from meat farms, are often sent abroad. 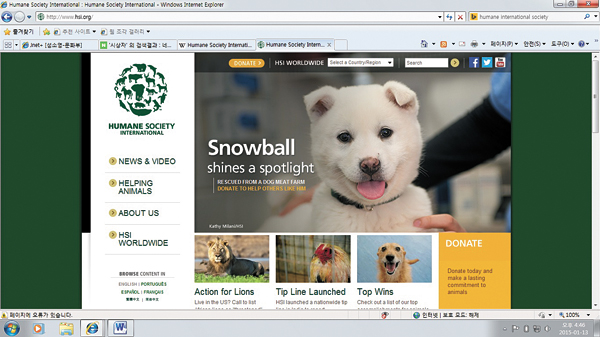 The main page of U.S.-based animal rights association Humane Society International’s website. Snowball is one of 23 dogs rescued from a dog meat farm in Ilsan, Korea, to Washington D.C. The dogs are awaiting adoption. [Screen capture from HSI]

After Jang’s radio interview came out, local news outlets began to carry sensational headlines over the story, referring to the Korean dogs as being exploited for donations.

Some Internet users left comments underneath the news, pointing out that the animal rights association doesn’t even have a branch here.

“Why do they bother to rescue our dogs, not their animals, which are also in trouble?” said one commenter.

Critics censured the society for specifically using dogs from Korea, capitalizing on its reputation as a nation that consumes an animal considered a pet in countries such as the United States, in order to raise more fuss - and funding.

But many Korean animal rights activists disagreed with the criticism.

“Animal rights associations raise their voices on many different issues whether they are related to their own or not,” said Cho Hee-kyeong, the head of the Korean Animal Welfare Association.

The organization has been active domestically for more than 15 years.

“Sometimes we talk about elephants that are exploited in Thailand. And when an organization like us does a campaign, donations ensue, but we do not run the campaigns just for donations.”

Lee Hyeong-ju, another official working for the Korean Animal Welfare Association, said every fund-raising campaign needs a model case and that the rescue of the 23 dogs was just that.

“Even Unicef uses a certain issue to raise funds over certain matters. That is the basic concept of fund-raising,” Lee said.

Lee has worked with HSI several times, including on a campaign to protect harp seals.

“They can’t come here to rescue 23 dogs just for donations because it takes a lot of money, from their lodging fees to the transportation of all the dogs,” she said.

“No organization flies miles away to earn a successful model case for donations.”

HSI’s side of the story

After Jang’s radio interview, HSI held a press conference at a shelter in Virginia late last week, along with a question-and-answer session for reporters.

“The dog farm owner was already growing blueberries and we gave him compensation in return for closing his dog farm business for good,” HSI’s O’Meara stated at the press event.

More details about the so-called blueberry project - the rescue of the 23 dogs - were shared by Lola Webber, a co-founder of Change for Animals Foundation and a consultant for HSI on its dog meat campaigns.

Webber recently visited Korea for the project and was at the dog farm in Ilsan on the day of the rescue.

The Korea JoongAng Daily asked her why HSI did not give a clear explanation of the dog farm owner’s main business - growing blueberries.

“The compensation was one in the same financial assistance to expand his blueberry business and end his dog meat business for good with handing over the dogs to us,” Webber said via an email interview.

“We have said from the beginning that this is the first farm we have worked with in closing its doors, confiscating the dogs, and helping the farmer transition that property into blueberry farming.”

None of the 23 dogs have been adopted yet, but Webber said they received hundreds of adoption applications for all of the 23, which are currently being reviewed in order to match the dogs with the best homes.

“Likely some will go to their new homes next week,” she said.

Although the dogs were saved from being eaten in Korea, those that fail to find homes will have to be euthanized.

But Webber was confident that this will not happen.

“There are far more people interested in adopting these dogs than there are dogs to place from Korea. There will be absolutely no problems in adopting out all dogs,” she said.

“Korea is not so generous to disabled humans or disabled dogs,” she said.

“Koreans still prefer to adopt pretty and smart dogs that are potty trained. Nevertheless, we stopped putting dogs up for overseas adoption years ago because it was harder to monitor them after the adoption.”

But domestic dogs are still being sent off on long journeys in search of new owners.

“There are some volunteer groups in Korea that consist of expats. They purchase dogs from Moran Market and send them overseas,” said another Lee from the Korean Animal Welfare Association.

One corner of the large Moran Market, located in Seongnam, Gyeonggi, is reserved for people who trade dogs for consumption.

Although HSI’s O’Meara said that dog meat is “another form of meat” in Korea and that it is a “commercialized industry,” dog restaurants have been increasingly shutting down in Seoul alone.

Last October, a dog restaurant with high-profile regulars such as former President Lee Myung-bak closed for good after 30 years simply because it had far fewer customers compared to the past.

According to the Seoul Metropolitan Government’s Restaurant Hygiene Department, there were 528 dog restaurants in 2005, but the number dropped to 329 last September.