Kang likely to play a backup role at Pirates

Kang likely to play a backup role at Pirates 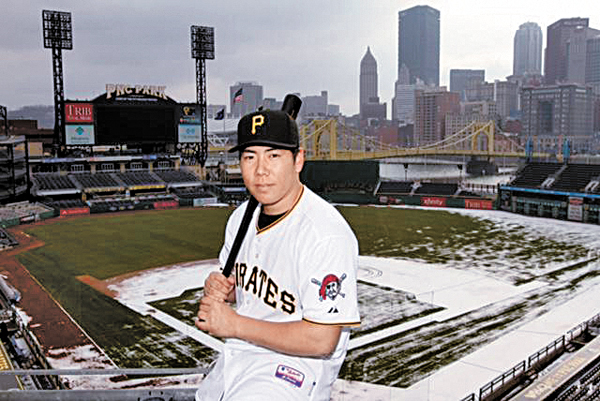 
Kang Jung-ho, who had his best season with the Nexen Heroes last year, became the first Korean shortstop to make the jump to Major League Baseball, though he is expected to take a backup role in his first year.

The Pittsburgh Pirates finalized an $11 million, four-year contract with the 27-year-old infielder on a busy Friday for the team. The deal includes a $5.5 million club option for 2019 with a $1 million buyout.

The Pirates, who have one of the largest analytic departments in baseball, still aren’t sure how Kang’s outstanding statistics in Korea will transfer over to the major leagues, but they are willing to find out.

“This is an unprecedented situation, so it’s difficult to truly project how he will perform,’’ Pirates general manager Neal Huntington said. “That is why we had multiple people watch him play multiple times. We feel good about bringing him into our organization and we feel that this is going to be a very good investment for our organization.’’

During his nine-year career in the KBO, Kang hit .298 batting with 139 homers in 902 games. He also played for South Korea in the World Baseball Classic in 2013.

“I’m very excited and humbled by this opportunity,’’ he said in a statement released by the Pirates.

Most of the ballparks in South Korea are smaller than in the major leagues. The Pirates, however, believe Kang will hit for power.

“He hit a lot of balls in Korea that would have been out of the ballparks in the major leagues, too,’’ Huntington said. “What we really like about him is that he has a good overall approach to hitting.’’

Kang was primarily a shortstop in Korea but will begin his career as a utility infielder, backing up Neil Walker, Josh Harrison and shortstop Jordy Mercer.

Huntington dismissed the idea of having Kang start the season in the minor leagues in an effort to better adjust to the American style of play.

“The best way to transition him to the major leagues is by having play in the major leagues,’’ Huntington said. “Our challenge, as it would be with any role player, is giving him enough playing time to stay sharp.’’

There is a possibility that some Pirates infielders could be traded to other teams, raising Kang’s chances of joining the starting roster this year. The Pirates were unable to agree on terms with first baseman Pedro Alvarez and second baseman Walker, and the sides exchanged arbitration figures. If management sticks to its intended plan of refusing to negotiate now that figures have been filed, then the three players will end up in hearings in February.

Shortstop Mercer, who is currently paid $515,500, is also set to adjust his salary with the Pirates when the next season ends.