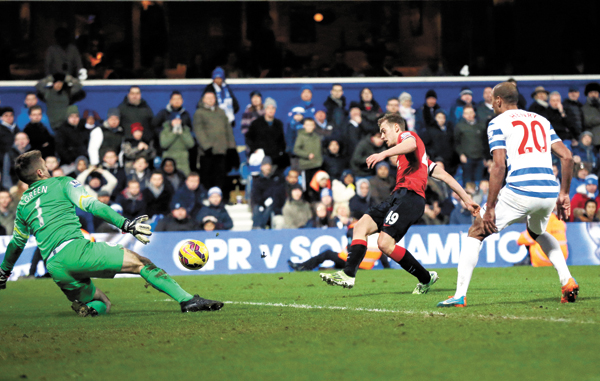 Marouane Fellaini and James Wilson came off the bench to end Manchester United’s three-game winless run in the Premier League on Saturday, scoring second-half goals in a 2-0 victory against a struggling but spirited Queens Park Rangers (QPR).

In an improved second-half performance, when United reverted to 4-4-2, Fellaini produced the breakthrough when he met Antonio Valencia’s pass in the 58th minute.

“When I changed the shape, I wanted speed or pace also in the attacking line,’’ United Manager Louis van Gaal said. “It’s a change in attack that brings lot of risk, but we have won 2-0 and it was deserved.’’

But it was a frustrating return to the team for striker Radamel Falcao, who was thwarted several times by Green after being dropped for last weekend’s loss to Southampton.

United remains fourth due to Southampton’s surprising form continuing with a 2-1 win at Newcastle. QPR is mired in the relegation zone after a fifth straight league match without a win.

Although it was QPR’s first home loss since October, the west London team is relying on its home form to avoid the drop.

All 19 points have been collected at Loftus Road, while 10 successive away losses have made even Manager Harry Redknapp feel uncertain about his future.

“That was one of our better home performances,’’ Redknapp said. “The players gave everything today. I can’t ask any more.’’

United didn’t manage a single shot on target last weekend. Such an anomaly was prevented after 10 minutes here when Michael Carrick struck at Green, who then kept out Falcao’s close-range effort with a quick reaction save.

Wayne Rooney’s penalty appeal after being tripped by Joey Barton was dismissed, but United was creating little for Angel di Maria or Falcao up front.

The visiting United fans were chanting “4-4-2’’ and the restoration of four rather than three at the back, coinciding with Fellaini replacing Juan Mata in midfield at halftime, contributed to an upturn in fortunes.

Although Falcao’s header was thwarted by Green’s low diving save, United did finally score for only the second time in six hours in the league through Fellaini.

“We just switched off for a second and got punished,’’ Redknapp said.

And as QPR pressed for the equalizer, the hosts were caught on the break when Wilson scored for the first time this season, having previously only netted twice in a single game in May.