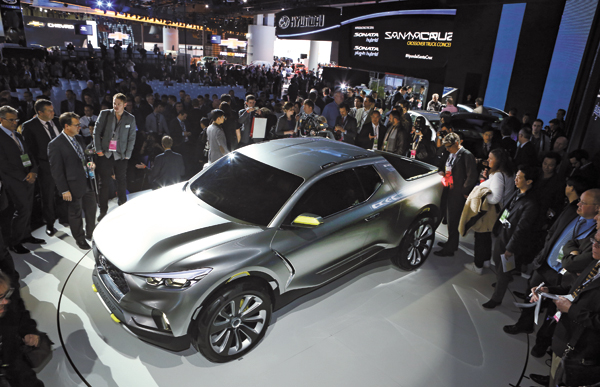 The North American International Auto Show (NAIA) is one of the world’s four major car exhibitions that traditionally acts as the trendsetter for the industry each year.

The two biggest trends in 2015 are accelerating competition in the environmentally friendly vehicle market and the return of high-performance vehicles fueled by falling international oil prices and the economic recovery in the United States. Most global automakers want to increase their U.S. sales this year.

According to the Associated Press, young Americans are becoming more economically active as low-interest auto loans are readily available, while automakers offer lots of new models with fascinating technological features. And gas prices are at a five-year low.

“I’m always looking for the black swan, to be prepared. And I’m looking at 2015 and saying, ‘I can’t even find a baby black swan,’’’ Mike Jackson, CEO of the AutoNation dealership chain, told AP. “I have never seen better conditions for the auto industry and the U.S. market.’’

According to NAIA organizers, more than 50 automakers introduced about 40 models for the first time among about 500 models at the show.

GM introduced the next-generation Volt electric vehicle (EV) and unveiled the Bolt EV concept car, which the company said can go 320 kilometers (nearly 200 miles) on a single charge. GM said the auto market in the United States will recover to the level of 2001, when about 17 million cars were sold. Last year, a total of 16 million new cars were sold in the United States, the most since 2006.

Regarding falling international oil prices, GM CEO Mary Barra said, “It will be temporary. In the long term, we will need fuel-efficient cars for sure.”

Toyota introduced the Mirai, a hydrogen fuel cell vehicle (FCEV). The Japanese automaker, which has been taking advantage of the weak yen to try to aggressively expand its global market share, plans big investments in 2015 for the first time in three years. According to industry sources, Toyota is considering building two factories in China and one in Mexico.

As part of its expansion plans, the company said it will share about 5,700 patents related to FCEVs with potential partners. The company expects to produce 3,000 Mirais annually from 2017, four times more than its current output.

Hyundai Motor, Korea’s leading automaker, introduced the Sonata plug-in hybrid (PHEV), a first for the company in the segment. The company predicts the current environmentally friendly car market of 2.2 million cars will grow to 6.4 million in 2020 and aims to expand its lineup from nine to 22 over the next six years.

“This Sonata is our first PHEV developed with in-house technology,” said Chung Eui-sun, vice chairman of Hyundai Motor. “We believe that it will help us to increase our environmentally friendly car sales, which will definitely be a mainstream segment in the future.”

German automakers also showed off their high-end technology in the segment.

During the show, the company’s chairman, Martin Winterkorn, announced that VW will invest about $7 billion in the United States through 2018, including opening 100 more dealerships. The German automaker is strong in China, but has been struggling in the United States where sales of passenger vehicles dropped 10 percent last year from a year ago, according to the industry.

Mercedes-Benz introduced two PHEVs, including the C350, and BMW also promoted its electric vehicle i series.

Automakers appear to be targeting the pickup truck and SUV markets in the United States, where gasoline is averaging $2.10 per gallon, $1.20 less than a year ago, according to the industry. That has helped fuel a boom in trucks and SUVs, two highly profitable vehicles for automakers, according to AP. SUVs and pickups outsold cars in 2014 for the first time in a decade.

On Jan. 12, local time, Hyundai Motor introduced its truck concept car Santa Cruz, or HCD-15, to target the millennial generation, the second-largest consumer group in the United States. The company said the concept car hints at a production model that could meet growing demand for crossover utility vehicles.

“They live in urban areas, but don’t have space for a traditional pickup,” said Mark Dipko, director of corporate planning at Hyundai Motor. “The vehicle will satisfy the millennial generation’s lifestyle for sure.” The truck provides 190 horsepower with a 2.0-liter turbo diesel engine and comes with the HTRAC all-wheel drive system.

Toyota also displayed the first makeover of its midsize Tacoma in nine years. About 150,000 Tacomas were sold in the United States last year, still far behind the Chevrolet Silverado, which sold 530,000.

“The competition in the 3.0-liter engine, $40,000 price range is too tough and it’s a segment owned by U.S. companies,” said an industry spokesman.

“I think we all notice it’s a lot less money to fill up your vehicle. That helps with a better sentiment and outlook,’’ Jeep CEO Mike Manley told AP.

It was also a good opportunity for lovers of high-performance cars.

At the show, the convergence of information technology and cars was noteworthy. One of the highlights was Google’s driverless program that began in 2010, and the company hopes to have fully autonomous cars on the streets by 2020. Google said it will cooperate with other car manufacturers and auto parts businesses to build self-driving vehicles.