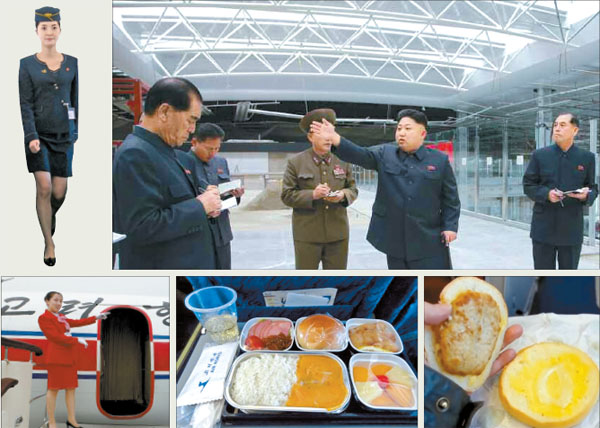 North Korea’s Air Koryo once again ranked last in an annual survey of world airlines, despite North Korean leader Kim Jong-un’s order for it to improve its services.

In the latest survey by Skytrax, a U.K.-based consultancy providing airline and airport reviews and rankings, Air Koryo was at the bottom of 600 global air carriers for the fourth consecutive year.

The survey reviewed various categories from the age of aircraft to inflight meals and language skills of the crew. The North received the lowest grade in most areas.

Established in 1950, Air Koryo is the state-owned national flag carrier of the North. One of the first direct orders issued by the young North Korean leader when he assumed power was to do something to improve Air Koryo.

In May 2012, only a few months after he took power, Kim issued an order to improve the quality of the inflight meals and modernize the cabin crews’ uniform during a visit to Pyongyang Sunan International Airport.

Kim, who spent his youth in Switzerland, apparently had high standards.

Due to the North’s economic woes, Air Koryo operates obsolete aircraft introduced by the Soviet Union in the 1960s. It has a fleet of 64 aircraft. No new acquisition has been made over the past 20 years.

The poor condition of the aircraft was publicized recently when a trip by Kim’s special envoy to Russia was disrupted. Choe Ryong-hae, a secretary of the Workers’ Party, and his entourage left Pyongyang for Russia on Nov. 17, 2014, but came back to the North due to the plane’s malfunction. After repairs, the aircraft left the country later that evening.

Passengers often criticize the inflight meals. They said the bread, coffee and meat are substandard, as main ingredients are largely produced in the impoverished North. Photos of a hamburger provided as an inflight meal have been posted by Air Koryo travelers on social media to substantiate their complaints.

For duty free shopping, the only products offered are North Korean liquors, cigarettes and needlecraft work. Reading materials on flights are the propaganda photo booklet Choson, the Workers’ Party’s newspaper Rodong Sinmun and English-language Pyongyang Times. No imported magazines and newspapers are offered.

JoongAng Ilbo reporters flew the airline on domestic routes in the North for reporting in the past.

The trips often provided illustrations of how the airline tries to save money on operational costs.

During a trip from Pyongyang to Wonsan, the pilot of a small propeller plane turned off the engine on the runway shortly after landing to save on fuel, the JoongAng Ilbo reported. A military truck approached, tied a rope to the plane’s landing gear to tow it to the terminal.

North Koreans explained to the JoongAng Ilbo reporter that the pilot and flight attendants would be walking home from the airport, an hour’s trek.

Although Air Koryo is a nominally civilian airline, it is supervised by the North’s military.

Kang Ki-sop, the director-general of the country’s General Civil Aviation Administration, is a three-star general.

Air Koryo’s main hub is Pyongyang Sunan International Airport, which is also undergoing modernization on the order of young leader Kim. The airport, located about 24 kilometers (15 miles) from the capital city’s center, was reconstructed after the Korean War.

Renovations were in their final stage, but Kim ordered them redone after he inspected the site last November last year, expressing his disappointment.

“It appeared to be a copy of an airport in another country,” Kim was quoted as saying by the North’s media. “Do it again with the Juche [self-reliance] ideology.”