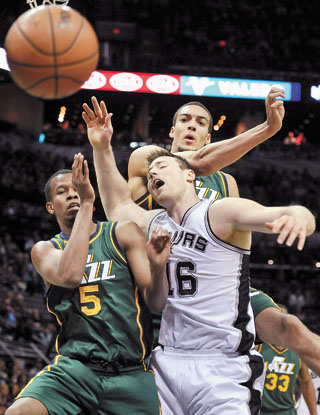 The blood rushed out of Gregg Popovich’s face as quickly as the San Antonio Spurs coach rose from the bench when Kawhi Leonard remained on the court after a hard foul.

Popovich saw the impact being without Leonard has on San Antonio, so he was “scared to death’’ when the NBA Finals MVP tumbled out of bounds. Leonard shook off the fall and helped put the hurt on the Utah Jazz.

Tiago Splitter scored 14 points, Leonard had 12 points and nine rebounds and San Antonio never trailed while holding Utah to a season-low scoring total in an 89-69 victory on Sunday night.

Tim Duncan added 11 points in 23 minutes for the Spurs, who have won three straight - including two straight double-digit victories with Leonard back in the lineup.

“He always impacts a game,’’ Popovich said. “Whether it’s the person he’s guarding or giving help and making a steal, rebounding the basketball, scoring; he always has an impact on the game. He was the MVP of the Finals last year. Those kind of guys usually have some sort of an impact. I’m just saying. Better with him than without him.’’

With Leonard helping hound the Jazz defensively, Utah shot 33 percent while also setting season lows in points by a San Antonio opponent for the game and in the first half (27).

Aside from Rudy Gobert’s 13 points and season-high 18 rebounds, there were few highlights for Utah.

“We couldn’t throw it in the ocean tonight,’’ said Jazz guard Gordon Hayward, who had 10 points.

Utah beat San Antonio 100-96 on Dec. 9 in a game that Leonard initially injured his right hand, suffering a small tear to a ligament while bracing his fall following a failed dunk attempt.

Leonard gave the Spurs another scare Sunday when he remained down for about 45 seconds after tumbling to the floor following a hard foul by Gobert with 9:14 left in the first half. As Popovich watched anxiously from the sideline, Leonard flexed and gripped his right hand. He remained in the game, showing no further aggravation while shooting 4 for 11 from the field.

“I was scared to death,’’ Popovich said. “He started feeling his hand and everything. That’s the one test you can’t give him. You can’t take his hand and whack it against the wall and say ‘How does that feel?’ We can’t do that. We have to just hope that when he gets in a game and it happens, that he’s OK.’’

Leonard showed he was fine, scoring all eight of his points in the second quarter following the foul, including his only 3-pointer.

The Spurs used quick successive passes to score eight of their first 12 points in the paint against a Jazz team that was averaging 5.8 blocks per game.

Tony Parker wrapped a bounce pass around Enes Kanter toward the basket for a cutting Splitter, who avoided a charging defender by passing to Duncan for an open layup.

After the starting unit established a presence inside, San Antonio’s reserves were 3 for 5 on 3-pointers. The Spurs finished 8 for 17 on 3-pointers.

San Antonio increased its advantage to 19 points in the third quarter and the sizable lead enabled the Spurs to limit veterans Duncan, Parker and Manu Ginobili to less than 24 minutes.