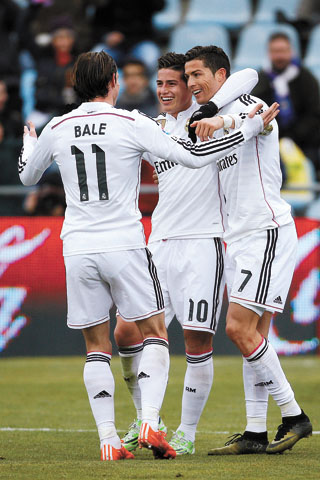 Cristiano Ronaldo scored twice in the second half of a 3-0 win at Getafe on Sunday as Real Madrid stayed top of the Spanish league at the halfway point.

Atletico Madrid stayed four points behind Real in third place with a no-frills 2-0 win at home over bottom side Granada.

Real started slowly three days after its defense of the Copa del Rey title was ended by Atletico, but its talented attack eventually came through after light snow fell on the Alfonso Perez Coliseum.

Ronaldo was particularly subdued until Karim Benzema dribbled to the end line and used a skillful change of foot to open a passing angle and set up the Portugal forward to net from close range in the 63rd minute.

Rodriguez continued to excel as Real’s playmaker when he spotted Ronaldo calling for the ball and swerved in a perfectly placed cross for the Ballon d’Or winner to head home in the 79th.

After its exit from the cup, Carlo Ancelotti’s team was under pressure to have a strong showing with only one win in four matches to start 2015 after finishing last year on a Spanish record 22-win streak.

“We didn’t come back from Christmas in the best shape,’’ Ancelotti said. “James [Rodriguez] played an extraordinary game. He is getting back to his top form. Little by little the entire team is recovering its best form.’’

In the first half, Getafe’s midfield of Jorge Sammir and Diego Castro kept Toni Kroos from linking up with Real’s forwards. The visitors were limited to Francisco “Isco’’ Alarcon’s strike that goalkeeper Jordi Codina palmed over the bar before Kroos rattled the woodwork from long distance just before halftime.

Getafe’s best scoring chance came with the result beyond doubt when Alvaro Vazquez hit the upright four minutes from time. The modest Madrid-based club remained one point above the relegation zone.

Bale ended the match limping, but Ancelotti said it was only a “knock.’’

Atletico striker Mario Mandzukic opened the scoring at the Vicente Calderon Stadium when he converted a penalty kick in the 34th after Diego Godin was fouled by Abdoul Sissoko while trying to reach Fernando Torres’ pass.

Playing its first game under interim coach Joseba Aguado following the firing of Joaquin Caparros, Granada had more than held its own until Mandzukic’s goal, mustering four shots and as many corner kicks to just one each for the hosts.

But the struggling Andalusian side didn’t threaten after falling behind, and recorded its 15th straight round without a win to remain at the foot of the standings.

Atletico substitute Raul Garcia used his back to bump Arda Turan’s lobbed pass into the net to seal the victory two minutes from time.

Messi tormented Deportivo from kickoff, drawing a save from goalkeeper Fabricio Agosto seconds before Ivan Rakitic met his run with a lobbed pass over the defense that the Argentina forward headed over Agosto in the 10th.

Messi got his second in the 33rd by chipping the ball over Agosto and his third came in the 62nd.