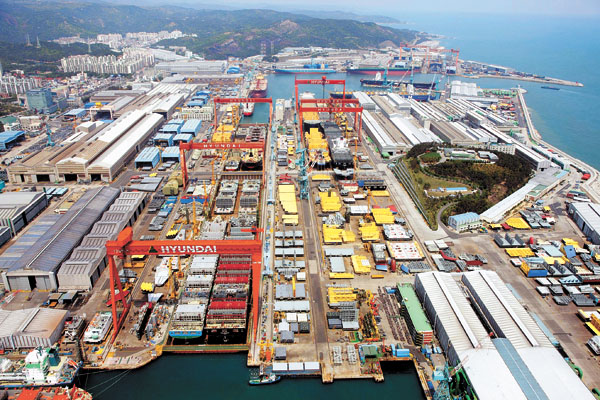 Hyundai Heavy Industries’ dockyard in Ulsan. Korea’s largest shipbuilder has set goal of collecting 22.9 billion dollars worth of orders this year. Provided by the company

The world’s largest shipbuilder, Hyundai Heavy Industries (HHI), has established an agreement to build submarines for India as part of a 40-year program to strengthen the nation’s naval forces.

The financially struggling company said it signed an MoU with Hindustan Shipyard Limited (HSL) last week stating that the Korean shipbuilder will work with the Indian company to build six submarines that the nation’s navy is preparing to order.

“Since HSL wants to be a part of the submarine manufacturing project by the navy, they asked us for help,” said a spokesman for HHI. “Because they are the largest shipbuilder in their country, the possibility that they will win the order is big.”

If HSL wins the contract, HHI will dispatch a work force to give technical support that the company needs to build the submarines while HSL will take charge of manufacturing the vessels. The Indian government will spend about $9.72 billion (10.47 trillion won).

In an interview with Indian media, HSL said, “HHI will help us build submarines as they are the biggest shipbuilder in the world and have some of the best high-end equipment and techniques. Since India has a 40-year submarine construction program, this will be a win-win situation for both of us.”

This is some of the best recent news for HHI, which has been struggling to make a profit as its number of orders decreases. The company expects that the project with HSL could help it grow in India in the future. The country is considered a big market for Korean companies in the defense industry. The Korea Institute for Industrial Economics and Trade said last year that India will become Korea’s second-largest export market in defense after the United States. According to the industry, the amount of weapons imported by India increased an average of 29.3 percent from 2009 to 2013.

“It looks like India will invest about $76.9 billion in the next five years to replace their decrepit military devices and weapons,” said a spokesman for the Korea Institute for Industrial Economics and Trade. “Since Korean submarines, radars and howitzers have good price competitiveness in the market, this will be a good business opportunity for us.”

The institute said India’s recent expansion of its military force is a matter of survival, especially after China has been aggressively strengthening its navy recently to expand its influences in the Indian Ocean, a transport route for about 80 percent of the world’s oil.

Last year, China sent two submarines to run a combat simulation in the Indian Ocean, saying it was necessary to protect the nation’s businesses from pirates.