Shinsegae Group says it will invest a record $3.1B

Shinsegae Group says it will invest a record $3.1B 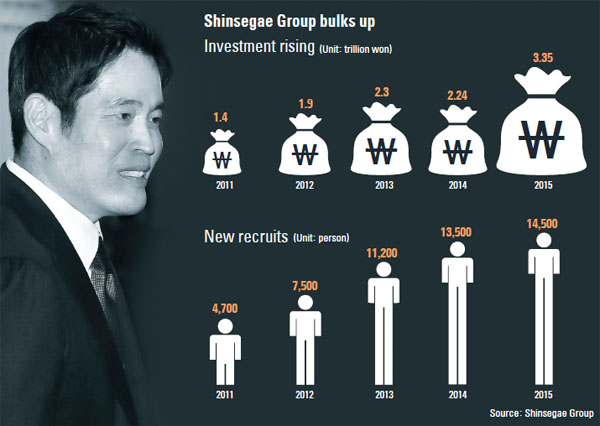 Shinsegae Group, which operates the country’s leading discount supermarket chain and department store, announced Monday that it will raise its investment this year to a record 3.35 trillion won ($3.1 billion) to expand its outlet mall and e-commerce businesses.

The investment is a 50 percent increase over last year’s 2.2 trillion won. The retail group said that the investment will go toward building outlet malls in suburban areas near Seoul in line with its long-term expansion plan.

Under the initiative it calls Vision 2023, the group outlined total investments of 31.4 trillion won by 2023 to achieve a sales target of 88 trillion won that year. It did not provide a specific breakdown of the funds.

“In the next 10 years, Shinsegae will spend 2 to 3 trillion won each year under the Vision 2023 plan,” the company said in a statement.

In the city of Hanam, Gyeonggi, Shinsegae is in the process of building a huge shopping mall with a movie theater and designer brand stores that will be open in late 2016. Similar malls will be built in Goyang, Gyeoggi, and Cheongna International City in Incheon. A large chunk of the investment will be spent on those construction projects.

Retail powerhouses Shinsegae and Lotte have high hopes for their all-inclusive entertainment and shopping destinations as people have shown a preference for outlet malls over pricey department stores.

Industry analysts have said that the department store market has become saturated, given that the annual sales growth in the sector has been stuck at 2-4 percent for the past three years.

On the other hand, sales at outlet malls have shown double-digit growth in recent years.

Premium Outlets in Paju, Gyeonggi, is run by Shinsegae Simon, a joint venture between Shinsegae Group and Simon Property Group based in the U.S.

Shinsegae, led by Vice Chairman Chung Yong-jin, will also complete the Shinsegae Department Store in Gimhae, South Gyeongsang, this year and build a new mall near its Centum City branch in Busan.

The company said it will build six more shipping centers dedicated to its online mall.

Shinsegae said that improving its delivery system is key to expanding its consumer base of the online store, ssg.com, which sells products for the discount supermarket chain E-Mart and the department store.

Last year, E-Mart opened a logistics center to bring same-day deliveries to customers. With the 14,605-square-meter (17,467-square-yard) establishment, E-Mart Mall wants to increase the portion of products that it delivers on the same day from 55 percent to 70 percent.

The group also said that it would hire a record 14,500 employees this year, up from last year’s 13,500, at a time when large conglomerate sin finance and manufacturing are cutting back on new recruits.

Shinsegae said the decision is aimed at revitalizing the domestic economy, which is now struggling with record high youth unemployment.

The group said the investment could be increased over the course of the year.

“In the process of executing the plan, we could increase the amount of investment at our discretion,” the company said in a statement.