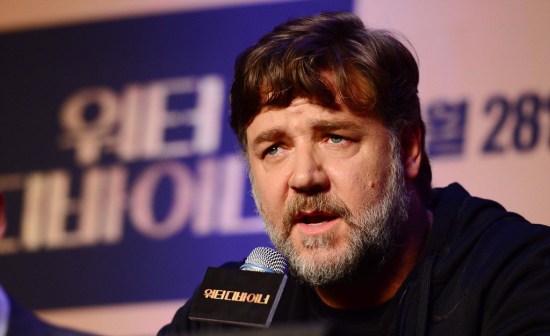 Russell Crowe, on his first visit to Korea, said at a press conference Monday in Seoul that Korean audiences will connect with his upcoming period flick “The Water Diviner.” Provided by the distributor

On his first visit to Korea, “Gladiator” star Russell Crowe said local viewers will connect with “The Water Diviner,” his inaugural feature as a director, because of its emphasis on family values.

“As far as I know of this country, family is very important,” Crowe said during a press conference held Monday at the Ritz-Carlton Hotel in southern Seoul.

“It sounds like a mad journey searching for the bones of his three sons so he can bury them back home, but many things happen along the course of the story that take you to a different place.”

His upcoming film is a period piece about the 1915 Gallipoli campaign during World War I, in which British allies, including the country’s former colony Australia, fought against Turkey to gain control of the Mediterranean region.

Crowe plays Australian farmer Connor who loses his three sons in the battle, leading him to take off to Turkey in order to retrieve the remains of his dead children.

The similarities between Korean and Australian history also factor into why Crowe believes this film will click with domestic viewers.

“There are a lot of episodes in the films that Koreans will connect to. A situation which Australia and New Zealand were in, having both been British colonies at the time of the First World War,” Crowe said, “and feeling a familiar obligation to go to war. That seems to be a similar situation to Korea in World War II.”

The 50-year-old actor, who was born in New Zealand but spent the majority of his life in Australia, said the effect of the deadly battle is still “gigantic and resonates there.”

As a father of two sons, Crowe said that home to him is “wherever my children are,” and hopes he is the type of father his children can rely on in any situation.

“I spend a lot of time worrying about the fact that I am away so much. But the main thing is that I do my best on their behalf and try to create a life in which they can roll and be educated and be creative young men,” he said.

Crowe also admitted that he has tried to keep it low key in terms of his music career because “the desire to be away from home and be on the road has faded away” after having his second child.

He may be a warm father at home, but at work he is a man with strong determination and his own distinct philosophy.

As an experienced actor who has starred in more than 30 films since 1990, Crowe said a “goose bump reaction” is his standard in choosing his next role, adding that there was no difference when deciding to direct for the first time.

“The transition was simple for me. And also, having worked with some of the greatest screenwriters and directors, you learn as you go,” he explained. “The desire to be the director has been there for a long time. When I read the script, I had that actual physical reaction.”

Crowe, who arrived in Korea on Saturday, was scheduled to hold a red carpet event on Monday evening at Lotte Cinema in Gwangjin District, southwestern Seoul. It will be followed by a screening at Apgujeong CGV where he will discuss the film with local movie fans afterwards.