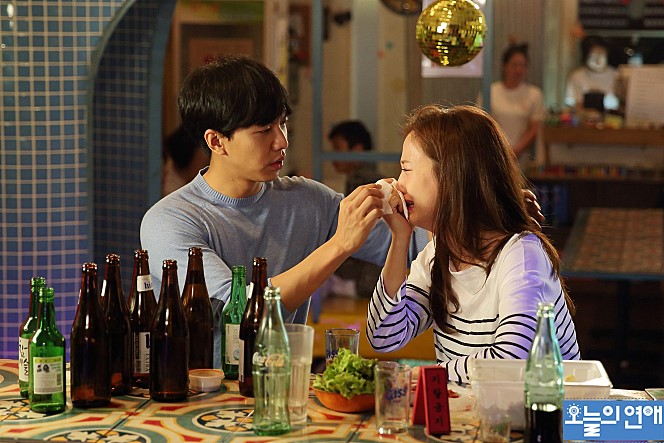 After a tight race against local rom-com “Love Forecast,” director Yoon Je-kyun’s “Ode to My Father” held on to its first place at the local box office for the fifth consecutive week.

The film, which traces Korea’s period of modernization after World War II, stars Hwang Jung-min as Deok-soo, a sacrificial father figure for his family. Last week, it became the first movie this year to break the 10 million admissions record.

This milestone is the second of its kind for director Yoon, who already achieved the feat with “Haeundae” in 2009.

Newly released “Love Forecast” by Park Jin-pyo fell slightly behind “Ode,” amassing an audience of 678,610 over the weekend. The film features actor-singer Lee Seung-gi as Jun-soo, a naive elementary school teacher who tries to win the heart of his childhood friend, Hyun-woo, a popular weather presenter who seems to have no interest in him whatsoever.

“Night at the Museum: Secret of the Tomb,” the third installment of the popular Hollywood adventure series, opened in third place, selling 422,734 tickets in Korea.

The comedy adventure flick stars Ben Stiller as night guard Larry at the Museum of Natural History where the animal models on display come alive when the sun goes down.

Combining the original heart-rending family story with a good dose of humor, the ambitious film also boasts a stellar cast, including Ha himself. Ha Jung-woo plays Sam-kwan, who marries Ok-ran, the most beautiful woman in town.